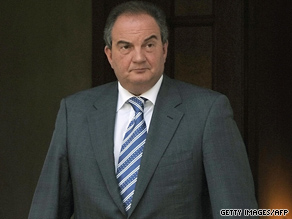 He called the early elections in response to pressure from the opposition Socialist Party, which threatened to block the election of a president in February if there was no general election first.

Karamanlis is also seeking a mandate from the voters for reforms in response to the international financial crisis, he said.

"It's up to the citizens to decide who has the right plan to govern and face the economic challenges," he said in a speech to the country.

"We have two very difficult and critical years ahead of us," he said in the speech on Wednesday. "There is only one path that offers hope and potential: We take -- without delay, without procrastination -- take all necessary measures to address these problems. By design and desire. We need to build the solid foundation that will ultimately get us out of this crisis stronger."

Karamanlis' term was not due to expire until September 2011.

But Socialist party leader George Papandreou insisted on new elections before the end of Papoulias' term as president in February. The Greek constitution requires the two major parties to agree on the election of a president, giving either party an effective veto.

Parliament will be dissolved on September 7, Karamanlis said on his Web site.

CNN's Efty Katsareas and Christine Theodorou contributed to this report.

All About Greece • Elections and Voting