Guantanamo detainee to be moved to Belgium

(CNN) -- A detainee at the U.S. prison camp in Guantanamo Bay, Cuba, will be transferred to Belgium, officials announced Friday. 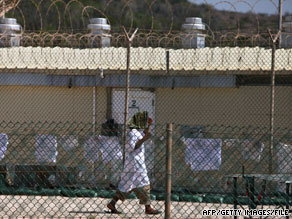 The Belgian Foreign Ministry has not revealed the identity of the transferred detainee.

The inmate was not named in a statement by the Belgian Foreign Ministry.

"Belgium has accepted the United States' request to accommodate an ex-Guantanamo detainee," the statement said. "He will receive an entry visa into Belgian territory and resident status that will allow him to have a work permit."

The government must determine which of the remaining prisoners will be put on trial or transferred to another country.

Other countries that have agreed to accept detainees from Guantanamo Bay include Chad, Iraq, Ireland, Saudi Arabia, Portugal and the island of Bermuda.