Geithner: Stimulus efforts to continue until 'recovery in place'

LONDON, England (CNN) -- The consensus by the G-20 ministers not to cut back on stimulus efforts yet will ensure that countries don't revert to fiscal restraint too soon, U.S. Treasury Secretary Timothy Geithner told CNN's Richard Quest in an exclusive interview Saturday. 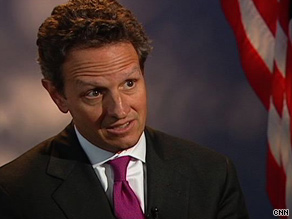 "The basic imperative...is to make sure that we do enough, long enough, so that you really have a recovery in place before we shift to restraint. Because the big mistake many countries made in the past has been to move too quickly to restraint," Geithner said.

For the United States, President Obama has made it clear that the stimulus program should be limited in duration, and that once growth is established it will be necessary to bring deficits down, he said.

"For the measures we take in crisis to be effective, people have to be confident that when the crisis is over and growth is back we will reverse those measures, we'll walk them back," Geithner said.

Geithner did not give a specific time for when the United States should begin to shift away from the stimulus, saying only, "when it's appropriate."

For the United States, the big challenge continues to be growth, Geithner said.