LONDON, England (CNN) -- British Prime Minister Gordon Brown has issued a posthumous apology for the "appalling" treatment of Alan Turing, the British code-breaker who was chemically castrated for being gay. 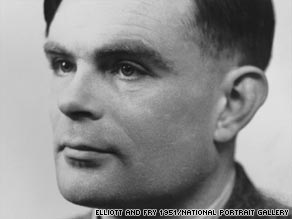 The apology came after more than 30,000 people signed an online petition on the UK Government Web site calling for the government to recognize the "tragic consequences of prejudice that ended this man's life and career."

Turing was just 41 years old when he committed suicide, two years after undergoing a court-ordered chemical castration. He had been found guilty of gross indecency for having a homosexual relationship. The punishment in 1952 was either a prison sentence or chemical castration. Turing chose the latter.

"He truly was one of those individuals we can point to whose unique contribution helped to turn the tide of war," he wrote, adding, "The debt of gratitude he is owed makes it all the more horrifying, therefore, that he was treated so inhumanely."

Turing is considered one of Britain's greatest mathematicians, a genius who is credited with inventing the Bombe, a code-breaking machine that deciphered messages encoded by German Enigma machines during World War II.

He went on to develop the Turing machine, a theory that automatic computation cannot solve all mathematical problems, which is considered the basis of modern computing.

Last month, the curious lack of public recognition for Turing's contribution to the war effort and computing in general motivated computer programmer John Graham-Cumming to campaign on his behalf.

"I was surprised by both the number of people who signed and the fast response from the government," Graham-Cumming told CNN. He said the Prime Minister had called him personally to relay news of the apology.

Stories about calls for a British apology were carried in newspapers in France, Switzerland, Spain, Austria, Portugal Poland and the Czech Republic. Supporters set up an international petition which attracted more than 10,000 signatures.