ISTANBUL, Turkey (CNN) -- The Turkish military said Friday it is weighing bids from American, Russian and Chinese defense contractors as it seeks to buy at least $1 billion worth of long-range missile defense systems. 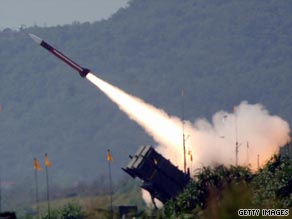 "We will purchase four batteries," Turkish armed forces spokesman Metin Gurak announced at a weekly press briefing in the Turkish capital, according to the state news agency, Anatolian. "The actual figure will be determined during the bidding process, but the cost is expected to be around $1 billion."

The news contradicts earlier reports in the Turkish and American media that the Turkish military was considering purchasing as much as $7.8 billion worth of Patriot missiles from the United States.

Turkish diplomats and military commanders have denied speculation that the Patriots could be used as part of U.S.-backed missile defense shield against its eastern neighbor, Iran.

"It is wrong to draw links between the Patriot and Iran," Turkish Foreign Minister Ahmet Davutoglu told CNN's sister network, CNN Turk, Friday morning. "We neither have a perception of threat from any of the neighboring countries, nor have any military or security related preparation against them."

Thursday, the Obama administration announced it was scrapping a missile defense program for Eastern Europe, after years of angry objections from Russia. The White House has said the program was aimed at protecting allies from Iran, not from Russia. Read the story

Meanwhile, relations have warmed considerably between the Iranians and the Turks in recent years. The Turkish government is putting itself forward as a neutral party, offering to host talks between Iran and the United States, France, Germany, Britain, Russia and China on Iran's controversial nuclear program.

But Turkey is also a member of the NATO military alliance, and it has long had close military ties with Washington. During the first Gulf War, Patriot missile batteries were temporarily stationed on Turkish territory.

Turkish officials say the missile defense batteries it wants to buy would be part of a larger, long-term program to modernize the country's military.

"Does Turkey really need these missiles?" asked Lale Kemal, a columnist who writes about military affairs for Turkey's Zaman newspaper. "Turkish military acquisition projects are not going through parliamentary or government scrutiny. We don't have a transparent military procurement system. So how can I or anyone say that Turkey needs them?"

Defense contractors have until Oct. 13 to submit bids for the missile defense package.