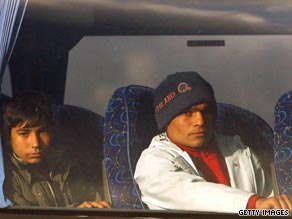 After being forced from their makeshift home, occupants of "the Jungle" were driven away in buses for processing.

French police broke up protests by refugee rights advocates and began clearing the squalid camp. The French government said it was targeting human smuggling and did not say where the migrants would be relocated.

A statement from the French immigration minister's office said the "illegal encampments" would be destroyed and then three bulldozers, a dozen trucks and a logging company would return the land to its natural state.

Watch a report on the camp's closure »

The statement said the goal was to destroy the Jungle and other migrant shanties, "which have become the main launch pad for clandestine immigration into the United Kingdom."

Was the French government right to demolish the illegal migrant camp?

Aided by smugglers, many of the migrants in coastal northern France attempt to make it into Britain, hiding in trucks that cross the English Channel. France and Britain signed an agreement in July to crack down on illegal immigration, including dispersing the migrants at the Jungle.

British Home Secretary Alan Johnson said he was "delighted" to hear that France was honoring the agreement.

"The measures that we have put in place are not only there to prevent illegal immigration but also to stop people trafficking," he said. "We are working with the French not only to strengthen our shared border but that of Europe as a whole."

Johnson said both nations were committed "to helping individuals who are genuine refugees." Others who don't need protection were expected to return home, he said.

The Jungle -- shanties cobbled from cardboard, plastic tarpaulins and scraps of wood -- housed as many as 1,000 men from nations such as Afghanistan, Iraq, Iran and Somalia.

Camp resident Mohammed Bashir escaped the Taliban in Afghanistan and made a new home in a tent here, among the heaps of garbage, sand and bramble on the outskirts of the French port city of Calais. Sometimes, eight men shared the tent.

"I never lived in such a condition like this back home, but right now we don't have any other choice," said Bashir, 24, who left behind his family. "It's very difficult, very hard for a person who has children and parents."

Desperation filled the air in the Jungle.

Many residents survived arduous and illegal treks from their homelands. Some held ambitions to keep going another 20 miles, across the water to Britain. Others hoped to realize refugee status in France.

But Tuesday, they were forced to put their plans on hold as they were evicted from the Jungle.

Refugee advocates circled the migrants and scuffled with police to keep them at bay. But eventually, the protests were broken up, the migrants were taken away and the shanties started coming down.

They say moving the migrants is simply displacing the problem.

"We don't know where they're going to go," said Matthieu Tardis, an advocate for asylum seekers. "We don't know what the government plans to do. We are not respecting human rights here, for sure."

The office of the U.N. High Commissioner for Refugees sent staff to Calais earlier in the summer to counsel people about asylum procedures in France and Britain.

According to the U.N. agency, most of the illegal migrants enter Europe through Greece and often fall victim to smugglers who turn a profit by helping migrants reach their destinations.

The camp residents who fled Afghanistan told CNN they had paid smugglers large sums. They were promised much more than the filthy camp, they said.

Bashir said he had no choice but to flee his home after Taliban militants accused him of spying.

"When they don't need you, they just slaughter you," he said. "They threatened me that [I would] be slaughtered."

Bashir's future remains uncertain as ever. He is sure only of one thing: He cannot go home.