MADRID, Spain (CNN) -- Chess legends Garry Kasparov and Anatoli Karpov faced off again in Spain on Tuesday, 25 years after their epic first world championship battle in Moscow, in what organizers are calling a "historic revenge match." 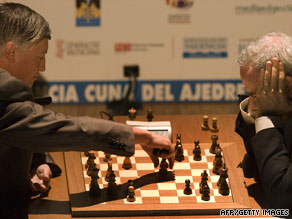 Garry Kasparov, right, and Anatoli Karpov play chess at the Arts Palau in Valencia, on Tuesday.

Revenge or not, the past chess champs will receive undisclosed sums for playing the three-day, 12-game match in the eastern port city of Valencia.

There will be no additional cash prize for the winner of the exhibition event, which the regional Valencia government is organizing under the title "Valencia, cradle of modern chess," event spokesman Rafa Carretero told CNN.

But bragging rights, yes, and perhaps with more on the line for Kasparov, who dominated the chess world for 20 years.

Karpov was world champion when they began their initial five-month match in 1984 in Moscow. That match was controversially stopped by chess authorities, citing concerns about the health of the contestants after 48 grueling games.

But the next year in Moscow, Kasparov beat Karpov in a rematch and went on to hold the number-one world chess ranking almost without interruption until his retirement in 2005.

The two last met, in their fifth match, in 1990, with games played in New York and Lyon, France. Kasparov won.

In a total of five world championship matches, Kasparov has the edge with 21 wins, 19 losses and 104 ties in a total of 144 games.

Karpov, now 58, and Kasparov, 46, told Spanish newspaper El Pais they hoped the rematch in Valencia would put chess in the spotlight again.

Karpov came from Russia to Valencia more than a week ago, with a team of elite trainers, organizers said. Kasparov arrived last Sunday from his home in Croatia, where he had been training.

The match, at Valencia's Palace of Arts, has attracted interest from ticket buyers on five continents, organizers said. One of the highest-profile fans on hand is Sulaiman Al-Fahim, president of the chess federation of the United Arab Emirates and owner of England's Portsmouth football team.

Dutchman Geurt Gijssen, who was referee for the last two matches between Karpov and Kasparov, will referee this match as well, the organizers said.

Kasparov is now an opposition politician in Russia, running unsuccessfully against then-President Vladimir Putin in 2007.