The company that owns a cash depot targeted in a daring helicopter raid this week said Friday it is offering a reward of more than $1 million for information about the heist. 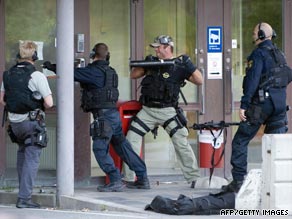 G4S said it is offering up to 7 million Swedish kronor ($1.01 million) for information leading directly to the arrest and conviction of the offenders or the recovery of the stolen money.

G4S also said the circulation of cash in Stockholm would not be adversely affected by the heist, which occurred just days before Sweden's monthly payday, when the depot would have been rife with cash.

The company did not disclose how much money had been lost, but the thieves could have gotten as much as the equivalent of several millions of U.S. dollars, according to CNN affiliate TV4.

A group of heavily-armed thieves used a helicopter early Wednesday to land on the roof of the cash depot in Vastbarga, Stockholm, which serves automatic teller machines all across the capital, TV4 reported.

They used explosives to get into the building, witness Bjorn Lockstrom told TV4, and later hoisted bags of money to the waiting chopper.

TV4 later reported that the blueprints of the building were public documents which anybody could request to see. G4S had never asked for the blueprints to be classified.

The helicopter had been stolen earlier during the night, police said.

The thieves had also placed a bag marked "bomb" outside the police heliport, meaning Swedish police couldn't immediately pursue the thieves because they had to first deal with the bag.

TV4 later reported that the bag never contained a bomb.

The thieves had also blocked the roads around the cash depot with metal spikes, TV4 reported.

No one was hurt during the heist, police said, even though several employees had been in the building when the robbers entered. Stockholm police said the heist had been elaborate.

"The robbery was very well planned. They brought a lot of firepower with them, among other things automatic weapons," Anders Bjargard from the Stockholm police, told TV4.

Two people have been questioned in relation to the heist, but no one has been arrested.

Police are still hopeful they will find the perpetrators. "We have a lot of traces after the perpetrators, both where the robbery took place and where we found the helicopter," Bjargard said.

The investigation is the biggest operation the Swedish police have mounted since the murder of Sweden's then-Foreign Minister Anna Lindh in 2003.

"It's an enormous piece of puzzle, and we don't want to miss anything," Anders Buren, head of police operations, told TV4.

Since the heist, Swedish police have been criticized for storing their helicopters at an unguarded heliport in the Stockholm archipelago, which enabled the thieves easily to put the police helicopter out of commission.

Swedish media also criticized police for not shooting at the thieves as they escaped in their helicopter.

But Bengt Svensson, the head of Swedish police, defended the police officers' actions.

"Just because we now have criminals who act like they do in the movies doesn't mean that we can do it as well," Svensson told Swedish newspaper Svenska Dagbladet.