LONDON, England (CNN) -- A series of photographic exhibitions have been organized in Europe and North America this autumn to highlight a campaign by Britain's Prince Charles to combat tropical deforestation. 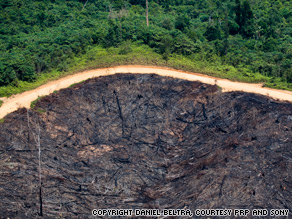 An aerial of Jambi Province, Indonesia showing the destruction of the tropical rainforest.

The photographs were taken by world-renowned environment photographer Daniel Beltra who was this year's winner of the Prince's Rainforest Project Award at the Sony World Photography Awards earlier this year.

The images graphically depict the effects of climate change on the rainforests in the South America, Africa and Indonesia.

Beltra compiled a library of around 40,000 images during month long trips to the Amazon Basin, the Congolese Forest and Borneo and Sumatra in Southeast Asia.

When he returned home Beltra produced a shortlist of around 1000 images from which the final exhibition photos were selected.

"I shoot a lot when I'm in the air," Beltra told CNN. "Trying to concentrate on a small detail on the ground when your flying at a speed of 150 knots is difficult."

And that's not the only problem Beltra encountered. The very acts of destruction he was documenting often got in the way of his work.

Click here to see a selection of images from the exhibition »

"When you are photographing deforestation, you are taking a lot of pictures of logging and fires and the smoke can make it very difficult to shoot."

Beltra was born in Spain but is now based in the United States. His work, which includes freelancing for the international environmental group Greenpeace, has taken him to over 50 countries and he is a fellow of the International League of Conservation Photographers.

HRH Prince Charles has long been a passionate defender of the environment and he founded the Prince's Rainforest Project (PRP) in 2007.

The PRP works alongside governments, international businesses, non-profit organizations and rainforest nations to find a solution to the deforestation and degradation of the rainforests.

Beltra hopes that his pictures will raise further awareness of the perils that humans face in the wake of continued rainforest destruction.

"I think we are all getting more aware but we really need to get our act together because at the moment we are destroying more than we are protecting," he said.

The multimedia exhibitions organized by Sony are taking place at the Royal Botanical Gardens at Kew in London, the Hotel de Ville, Paris, the Alexa Center, Berlin and the Mercy Corps Action Center, New York.