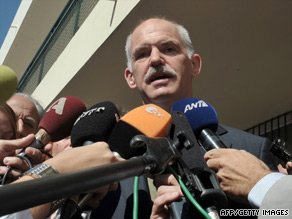 "On this course, nothing is going to be easy -- it will take work, hard work," Papandreou said in his victory address. "And I will always be honest with the Greek people so that we may better solve the problems of the state."

Karamanlis' term was not due to expire until September 2011. But Papandreou insisted on new elections before the end of President Karolos Papoulias' term as president.

The country's ailing economy was the focus in the run up to the elections, as both candidates offered conflicting prescriptions to revive it. While Karamanlis called for cuts in spending, Papandreou proposed a massive stimulus.

"And like every Greek, I hope that he succeeds at the big challenge of facing up to the economic situation," Karamanlis said. "Because this challenge, I have said many times, is a national issue."

It was unclear whether Karamanlis would step down as New Democracy party leader, as the elections marked the worst defeat the party has seen in more than 20 years.

According to figures posted on the Interior Ministry's Web site, the Socialist party received 44 percent of the vote, compared wotj New Democracy's 34 percent, with 87 percent of votes counted. The margin is the largest seen in a Greek vote in decades.

"All of the opinion polls are suggesting that Greek voters are becoming more frustrated with (Karamanlis') governance, more frustrated that after two parliamentary terms some of the objectives which he'd set have not been achieved," Kevin Featherstone, director of the London School of Economics' Hellenic Observatory, told CNN.

However, Papandreou's stimulus plan is also under scrutiny, with critics wanting to know more details, such as how it would be funded.

In addition, problems such as corruption have long plagued the Greek government, Featherstone noted.

"These are systemic problems. These are problems which have been in Greece for generations. Over the last 20 years, we've had a succession of governments coming into power promising to clean up, promising to tackle waste, promising to reform the public administration, promising to be more transparent and clean," he said. "By and large, voters have been disappointed or there has been some fair degree of frustration and disappointment."

"Tackling the problem, these endemic problems, really requires major efforts to reform public administration to tackle corruption and to change the culture of expectations," he said.