CAIRO, Egypt (CNN) -- Egypt is suspending ties with France's famous Louvre museum until the latter returns artifacts that it knew were stolen when it purchased them, the head of the country's antiquities council said Wednesday. 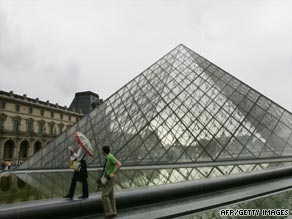 Egypt accuses the Louvre museum of failing to make good on promises to return antiquities.

Zahi Hawass, director of the Supreme Council of Antiquities, said he wrote a letter seven years ago to major museums around the world asking them to consult with Egyptian authorities before buying any ancient Egyptian artifacts from outside sellers.

Hawass said the Louvre had bought five murals chipped off the walls from a tomb in Thebes and been stolen by antiquities robbers in the 1980s.

He sent a letter to the Louvre a year ago asking that the stolen paintings be returned, he said.

The museum promised to return the items but has not followed through, he said. Until it does so, Egypt will suspend its cooperation with the Louvre, Hawass said.

A Louvre spokesman declined to comment on Egypt's claims.

Egypt maintains antiquities exchange programs with museums around the world. The Louvre is one of the biggest repositories of ancient Egyptian antiquities in the world, much of it treasure taken during the time of the French and British occupation of the country.

Egypt's position is that artifacts taken by European powers during that period are a fait accompli, but anything taken illegally since Egypt's independence must be returned.

This has been one of the major emphases of Hawass since he became head of the Supreme Council of Antiquities in 2002.

Egypt took similar steps against museums in England and Belgium in the past. Those ties were restored after the artifacts in question were returned, Hawass said.