LONDON, England (CNN) -- Gary McKinnon, the hacker who broke into Pentagon and NASA computers, was at risk of suicide Friday after losing an effort to fight extradition to the United States, his attorney said. 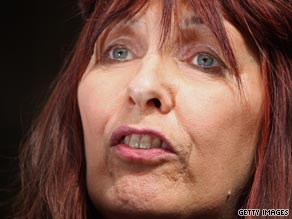 "This is the wholesale destruction and bullying of a small individual by the United States and now our own government," attorney Karen Todner said in a statement.

The British government did not respond.

The U.S. government says McKinnon carried out the biggest military computer hacking of all time, accessing 97 computers from his home in London for a year starting in March 2001, and costing the government about $1 million. U.S. authorities want him extradited to face trial in the United States.

McKinnon, currently free on bail in England, has said he was simply doing research to find out whether the U.S. government was covering up the existence of UFOs.

McKinnon bases his case partly on the fact that he has Asperger's syndrome, a type of autism.

He had hoped to bring his case before the nation's newly-formed Supreme Court. But the court rejected the request Friday.

McKinnon has one effort left -- to appeal to the home secretary.

"The effect on Gary of these proceedings and impending extradition has been, and is, devastating," Todner's statement said. "He is a highly vulnerable man in a very fragile state and this is a huge blow to him and his family."

McKinnon is thought to have acted alone, with no known connection to any terrorist organization, said Paul McNulty, the former U.S. attorney for the Eastern District of Virginia.

A U.S. federal grand jury indicted McKinnon on seven counts of computer fraud and related activity. If convicted, he would face a maximum of 10 years in prison on each count and a $250,000 fine.

McKinnon has said it was easy for him to access the secret files.

All About NASA • Extradition