(CNN) -- David Waller has some simple advice for anyone looking to improve morale at their organization -- even if it's not the easiest advice to follow. 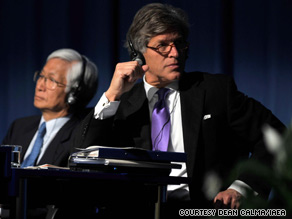 "I say to them, jokingly, 'Why don't you try winning the Nobel Peace Prize?' " he said.

Waller, deputy director general of the International Atomic Energy Agency, knows what he's talking about. The organization, based in Vienna, Austria, and dedicated to the safe and peaceful use of nuclear power, was awarded the prize in 2005.

President Barack Obama was the surprise winner Friday of this year's peace prize. But for most of this week's other winners, the honor marks a leap from relative obscurity to a spot in the international limelight.

Waller said the scientists, authors, activists and others receiving Nobel honors this week should be prepared for an experience that will change their lives in the months and years that follow.

"The day that it was announced that we were winning the Nobel Peace Prize, I can assure you that it was like a bolt of lightning that went through this place in terms of energizing staff and giving people a sense of self-worth," he said. "It was absolutely remarkable."

In all, 172 people and 33 organizations were nominated for the peace prize-- although the Oslo, Norway-based Nobel committee had not announced who its finalists were.

The peace prize is one of five awards handed out annually by the Nobel Foundation in Stockholm, Sweden. The other four prizes are for physiology or medicine, physics, chemistry and literature.

Starting in 1969, the Sveriges Riksbank Prize in Economic Sciences in Memory of Alfred Nobel also has been awarded. The peace prize is the last of the awards to be announced this week and the Riksbank prize will be awarded Monday.

Even for an organization like the IAEA, a United Nations affiliate that traces its roots back to 1957, things were never the same after receiving the revered award, Waller said.

"Many, many things changed," he said. "The number of applications we had for positions here, which was already high, skyrocketed. People returned phone calls very quickly. The whole spectrum of things of that nature changed."

Elizabeth Dobie-Sarsam, a media specialist with the agency, remembers the day it received the Nobel -- she was on vacation and asleep on her sister's floor in Canada when it was announced.

"For three years running, we had been sitting on the edges of our chairs hoping that we won," she said. "That year, for some reason, we thought, 'Oh, forget it. We're not going to get it.' "

The trip back to Vienna would have taken her too long to handle the initial rush of attention, so she finished her vacation, with family members introducing her as "the Nobel Peace Prize winner" for the rest of the week.

Months later, Dobie-Sarsam said, she was still working to keep up with a flood of media interest in the agency spurred by the award.

She said that, four years later, the award still contributes to a feeling of unity among the agency's more-than 2,000 employees who come from over 100 different countries.

"That flush of excitement, unfortunately, it goes away with time," she said. "[But] you do get reminded. You walk through the corridor and you see that certificate hanging -- it's acknowledgement that what we do is incredibly important."

The Nobel recipient receives a prize of 10 million Swedish crowns, or about $1.4 million, another life-changer for many recipients.

But Waller said it's the recognition of what the Nobel panel called the "incalculable value" of his agency's work that helps when employees are having a hard time with their sometimes slow, frustrating work.

"I think it's a continuing energizer for our staff," he said.