The view from Egypt: Jumping the gun on the peace prize?

CAIRO, Egypt (CNN) -- When President Barack Obama came to Cairo in June and made his address to the Muslim world, reaction in Egypt was wildly positive. 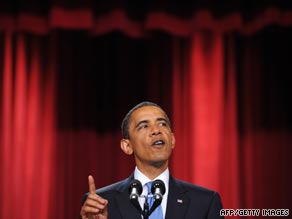 Many Egyptians had fallen in love with the new young American president with an Arabic middle name. Some even picked up the "Yes we can" slogan.

His appeal was fueled by an almost unanimous dislike for his predecessor, George W. Bush, widely perceived in the region as a Christian fundamentalist leading an anti-Muslim crusade.

But that was then. Euphoria has a short shelf life in the Middle East, and Barack Obama is not exempt.

Watch why Obama is viewed as work in progress »

To gauge reaction among Egyptian intellectuals to the news, I called Hisham Qassim, a democracy and human rights activist I've known for many years. He was perplexed at the news from Norway.

President Obama, he said, "is stumbling in the Middle East. He hasn't achieved any of his promises, and the Arab-Israeli conflict appears to be getting even nastier."

In short, he said, "nothing is working."

One winner of the Nobel peace prize Egyptians continue to admire is former U.S. President Jimmy Carter, who won the prize in 2002.

After personally overseeing prolonged and painstaking negotiations between Egyptian President Anwar Sadat and Israeli Prime Minister Menachem Begin, Carter brokered the 1978 Camp David Peace Accords. It was the first peace agreement between Israel and an Arab country, and one a majority of Egyptians still believe was a major landmark in their long history.

Egyptians contrast Carter's intensive involvement in peace efforts with Obama's stab at peace-making between Israel and the Palestinians. After initially demanding Israel halt all settlement construction in the occupied West Bank and East Jerusalem, the Obama administration softened its stand after running into a concrete wall of opposition from hard-line Israeli Prime Minister Benjamin Netanyahu.

The Obama administration is seen, not only in Egypt but also across the Arab world, as following in the footsteps of so many previous American administrations, caving in to Israeli intransigence. It hardly augurs well for peace in the Middle East, especially at a time when tensions are simmering in Jerusalem, with some wondering if a third Palestinian intifada is in the making.

Hisham Qasim, the human rights activist, pointed out to me that the deadline for submission of nomination to the Nobel Committee is early February, which means that the nomination was, at least in theory, made on the basis of Obama's performance after less than two weeks in office.

He still has more than three years to go before the next elections, and the United States is embroiled in two costly wars in Iraq and Afghanistan, and is, according to some reports, considering military action against Iran. There is an awful lot of war on America's plate at the moment.

For all these reasons, it's not surprising that many in the Middle East say it's a tad premature to be handing Barack Obama the peace laurels.