LONDON, England (CNN) -- Dozens of protesters camped out on the roof of Britain's parliament overnight to "save the climate," police reported Monday. 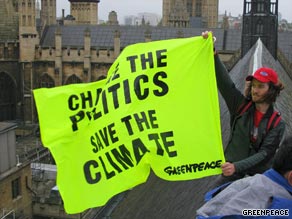 Greenpeace says 24 protesters were arrested after voluntarily coming down from the roof.

More than 50 protesters climbed onto the roof of Westminster Hall at about 3 p.m. (10 a.m. ET) on Sunday, police said, and 31 remained on the roof as of Monday morning, environmental group Greenpeace said.

About two dozen came down voluntarily and were arrested on suspicion of trespassing Sunday night, both sides said. Police put the number at 23 while Greenpeace said it was 24.

The protest was timed to coincide with the return of British lawmakers from their summer vacation, Greenpeace said.

Greenpeace intended "to call for a new style of politics in Britain, one capable of rising to meet the challenge of climate change," it said in a statement.

"The government's own Committee on Climate Change will publish a progress report on UK carbon emissions," the group said on its Web site.

"They make it clear that Britain is not doing enough to meet its commitments, and insist that a 'step change' in emissions cuts is needed. Do you think this a responsible way to protest?

"Britain has yet to show true commitment to making the process a success. We need politicians who are thinking about the next generation, not just the next election," the activists said.

The protest is peaceful and police are in touch with a Greenpeace representative on the ground, hoping to bring the protesters down safely, the police said in a statement.