(CNN) -- Pope Benedict XVI canonized five new saints Sunday, including a 19th-century priest who worked with ostracized leprosy patients in Hawaii before contracting the disease himself and dying from it. 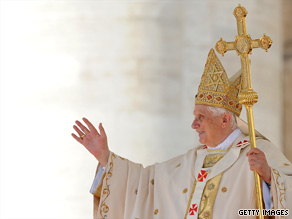 Jozef De Veuster, better known as Father Damien, was elevated to sainthood along with the four others in a solemn Mass that was moved indoors from St. Peter's Square to the St. Peter's Basilica in Vatican City because of an early morning thunderstorm.

Thousands attended, including the woman whose cure from cancer was attributed to her praying to Damien. The church counts her cure as one of two miracles the priest performed -- a key requirement for sainthood.

The others who were canonized Sunday are:

-- Zygmunt Szczesny Felinski, a Polish bishop who kept championing Catholicism after Russia shut down Polish churches in retaliation for the Polish uprising against Russia in Warsaw in 1861.

-- Jeanne Jugan, a French nun who set up an order that runs homes for destitute around the world.

-- Francisco Coll y Guitart, a Spaniard who founded an order of Dominicans in the 19th century.

-- Rafael Arnaiz Baron, another Spaniard, who wrote extensively about spirituality before his death at age 27.

Damien was born in Belgium and went to Hawaii in the 1870s in place of his ill brother. At the time, the kingdom of Hawaii banished its leprosy patients to Kalaupapa, a 5-square-mile village on the island of Molokai.

Because of the stigma attached to the disease, doctors refused to treat patients and society ostracized them.

Damien volunteered to serve as pastor there, and did so for 16 years. He died at age 49 after contracting leprosy, which is now called Hansen's disease.

Today, Kalaupapa is a national park and home to 25 residents, there because of the disease. All of them are cured, but have chosen to stay because it is their life-long home.

Though it was once feared as highly contagious, it is not particularly transmissible and is easily treated with antibiotics.

The Catholic Diocese of Honolulu had long sought canonization for Damien.

Sainthood is bestowed only after a thorough examination of the person's life and requires two documented miracles.

In Damien's case, the church considered the overnight healing 100 years ago of a French nun who was on her deathbed from an intestinal ailment.

It also considered the case of Audrey Toguchi, a public school teacher, who fully recovered from liposarcoma in 1999 after she prayed to Damien, she said.

All About Vatican • Roman Catholicism • Religion