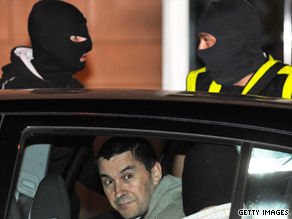 The politician, Arnaldo Otegi, is a leader of the former Batasuna party, outlawed for its ties to ETA, which is blamed for more than 800 deaths in its four-decade fight for Basque independence.

Otegi and the others were arrested in northern Spain for trying to regroup the leadership of the so-called Basque left movement in order to "carry out ETA's orders," the statement said.

The operation is being directed by anti-terrorism Judge Baltasar Garzon of Spain's National Court, and the suspects were due to be taken to Madrid to appear before him in the coming days, the statement said.

Otegi has been in trouble before with the law. In 2007, he was arrested shortly after Spain's Supreme Court upheld a lower-court's conviction of him in 2006 for glorifying terrorism at a memorial in December 2003 for a dead ETA leader.

Otegi was sentenced to 15 months in jail. But at the time of his 2007 arrest, he had been free on $300,000 bail in a separate terrorism case of inciting violence.

A senior government source who insisted on anonymity said last month that officials had been expecting Otegi to try to step forward soon as an interlocutor promising to help end ETA's violence and negotiate a deal with the government.

The aim, according to the source, was to permit a rebranded Batasuna to run for local office again, on the promise it would seek to end ETA's violence once it had regained elected government positions.

But government officials have said publicly there can be no further talks with ETA, which is listed as a terrorist group by Spain, the European Union and the United States.

When ETA declared a unilateral "permanent" cease-fire in March 2006, the government began steps toward a peace process, but ETA then bombed Madrid's airport in December 2006, killing two men and causing extensive damage.

ETA in 2007 called off its cease-fire, which the government had already considered finished.

The government has said since then that the only way to end more than 40 years of violence will be for ETA to renounce its campaign and lay down its arms or face its demise through a police crackdown.

Yet ETA has continued its killings and bombings, including fatal attacks in the Spanish island of Majorca in August.

But police in Spain and in neighboring France -- ETA's traditional rearguard base -- have cracked down hard, arresting dozens of ETA suspects, including four of its alleged top leaders.

The arrest of Otegi and others on Tuesday comes two days after police detained two of the most-wanted ETA suspects in France. They were allegedly involved in ETA logistics and police later found weapons and material to make car bombs, the Interior Ministry said in a statement.