DOVER, England (CNN) -- As the ferries dock at the Port of Dover after crossing the English Channel, the trucks pull in at a steady rate. Afghanistan's opium harvest can be traced right back to some of those trucks. 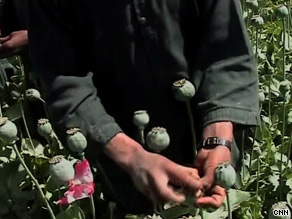 Afghanistan is the world's biggest supplier of illegal opium, which is made from the seed pods of poppies.

Coates has spent almost 25 years tracking the heroin pipeline. But he says the approach over the last few years is more intelligence-led.

"If we seize the powder, the commodity, they very quickly replace it. The financial flow is much more important. If you can hit the gangs, the proceeds of crime, you really are affecting them, you're reaching right into them and actually impacting them," says Coates.

Watch how the Afghan drug pipeline is difficult to stop »

A new United Nations report confirms the status of the lawless and fertile lands of southern Afghanistan as the world's biggest supplier of illegal opium, the addictive narcotic that is made from the seed pods of poppies.

The drug is ravaging the young, poor and vulnerable in Afghanistan, and its proceeds are the lifeblood of the Taliban. It also is spreading on a drug trail that spans the world.

While Western governments have for years debated how to stop the lucrative drug trade in Afghanistan, the business has only grown. The U.N. report notes that for years, the counternarcotics strategies around the world have failed to have any real effect on addiction or drug trafficking. In some countries, heroin is 10 times cheaper now than it was 30 years ago.

"We've been very good in the past at playing cops and robbers, but did [that] make a difference? No it didn't," concedes Coates.

The key now, say law enforcement officials, isn't wiping out the poppies, scanning every truck or locking up the small-time dealers, but rather gathering intelligence that follows and then destroys the lucrative money trail.

Britain's Serious Organized Crime Agency says it is now committed to taking a collaborative approach not just with its own national partners, but by working intelligence links through the world.

All About Afghanistan • Heroin • United Nations • The Taliban