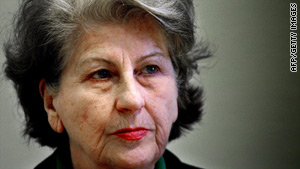 (CNN) -- Former Bosnian Serb leader Biljana Plavsic was released from prison in Sweden Tuesday, after serving two thirds of an 11-year sentence for crimes against humanity.

Plavsic, 79, who was once dubbed the "Iron Lady" of the 1992-1995 Bosnian war, left the country after her release, Sweden's prison service said.

It also comes as the trial of her predecessor, Radovan Karadzic, gets underway in The Hague, Netherlands. Karadzic was arrested last year after more than a decade on the run.

Plavsic succeeded Karadzic as the Bosnian Serb leader when he was removed from power in 1995. Both were charged with war crimes by the International Criminal Tribunal for the Former Yugoslavia in 2001, along with former Bosnian Serb parliamentary speaker Momcilo Krajisnik.

The following year, she pleaded guilty to one count of crimes against humanity in exchange for prosecutors dropping seven other war crimes charges, including two counts of genocide.

The United Nations War Crimes Tribunal sentenced her to 11 years in prison, saying in its February 2003 decision that Plavsic had participated in "a crime of the utmost gravity" and "no sentence can fully reflect the horror of what occurred or the terrible impact on thousands of victims."

Under Swedish law, she was eligible for release after serving two-thirds of her sentence.