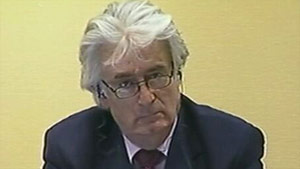 Radovan Karadzic appears at a hearing on Tuesday to discuss his refusal to appear at the trial.

The Hague, Netherlands (CNN) -- Bosnian war crimes suspect Radovan Karadzic launched a full-throated attack on the International War Crimes Tribunal Tuesday, as he appeared at a hearing to discuss his refusal to appear for trial.

He said he "cannot take part in something that has been bad from the start, and where my fundamental rights have been violated."

Karadzic, who is accused of responsibility for the worst massacre in Europe since World War II, says he has had insufficient time to prepare his defense. He is representing himself.

But Judge O-Gon Kwon told Karadzic it was the court, not the defendant, who decides when the case is ready for trial. He advised Karadzic to participate in order to get a fair trial.

The judges will decide by the end of the week how to deal with the former Bosnian leader's boycott of the proceedings, Judge Kwon said before adjourning the trial for the day.

Karadzic, the Bosnian Serb leader during the bloody breakup of Yugoslavia in the early 1990s, faces 11 counts of genocide, war crimes and crimes against humanity. Memories of the massacre remain raw. Watch the video

The charges stem partly from the massacre of more than 7,000 Muslim men and boys at the town of Srebrenica, in what is know Bosnia and Herzegovina, in 1995.

Karadzic has been insisting he has not had enough time to prepare for the trial, saying there are 1.3 million pages of documents to study.

He denied stalling, and said imposing a lawyer on him would not help.

"It is with joy that I am preparing for these proceedings," he said through a translator. "Nobody can get through this material better than I can, no lawyer. The best possible solution would be that the defense be given sufficient time" to prepare.

"I hope that this is not some kind of a trick," he said. "I am attending a status conference hearing."

The court cannot force a defendant to appear. Karadzic, as a "self-representing accused," is the only one who can cross-examine witnesses and speak in court about the substance of the charges against him.

However, judges can impose a lawyer on Karadzic if he continues to refuse to cooperate.

The trial began without his presence on October 26, more than a year after Karadzic was captured in Belgrade, the capital of Serbia.

He had been on the run for more than 13 years and was living in disguise in Belgrade, practicing alternative medicine at a clinic.

Karadzic faces life in prison if he is convicted. The court cannot impose the death penalty.

The 1992-95 Bosnian conflict was the longest of the wars spawned by the breakup of Yugoslavia in the early 1990s. Backed by the government of then-Yugoslav President Slobodan Milosevic, Bosnian Serb forces seized control of more than half the country and launched a campaign against the Muslim and Croat populations.

Karadzic was removed from power in 1995, when the Dayton Accords that ended the Bosnian war barred anyone accused of war crimes from holding office.