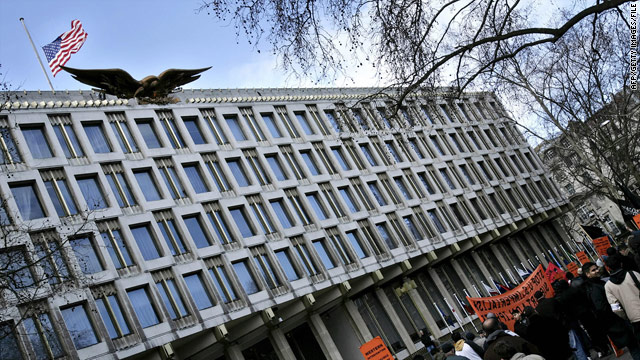 The signing of the deal is another major step in the embassy's plans to relocate from its longtime headquarters in central London to a new site in Wandsworth, on the south bank of the River Thames.

It wasn't immediately clear how much Qatari Diar Real Estate paid for the embassy building in Grosvenor Square, whose 1960s facade was recently given listed status, meaning its design can't be changed.

The embassy will continue to operate from the current building until the new one is completed in 2016 or 2017, the embassy said. Construction is expected to begin in 2012 or 2013.

It was a year ago that the embassy announced it was looking for a new site that is more modern, open, and secure than the current building in London's West End. It has now settled on a site in Wandsworth and is having a design competition for the new building.

When the embassy does move to Wandsworth, it will mark the end of a more than 200-year association with Grosvenor Square, in the historic and exclusive neighborhood of Mayfair near Hyde Park.

John Adams, who later became U.S. president, lived on the square from 1785 to 1788, when he was the first U.S. minister to the Court of St. James. The building in which he lived still stands in the square's northeast corner.

The embassy moved to various locations in the West End before returning to Grosvenor Square in 1938. For years, it occupied a building on the east side of the square -- a building that now houses the Canadian High Commission.

During World War II, the square was known as "Little America" because the embassy was on one side and Gen. Dwight D. Eisenhower's headquarters were on the other.

The embassy moved to its current site, occupying the entire west side of the square, when the building was completed in 1960.

The concrete, four-story structure was designed by Eero Saarinen, who also designed the Gateway Arch in St. Louis, Missouri, and the U.S. Air Force Academy Chapel in Colorado Springs, Colorado.

Since the September 11 attacks in 2001, the embassy has caused controversy locally by installing blast walls in a wide perimeter around the building. Neighbors complained the walls were unsightly, and the walls caused the road in front of the building to be closed to traffic.

Sitting atop the building at the front is a huge gilded aluminum eagle with a 35-foot wingspan. It is not clear whether the eagle will be considered part of the building's listed status, meaning it will have to stay on the facade, or whether it can be moved to the new location, according to a spokesman for the realty firm Cushman and Wakefield, which advised the United States on the sale.