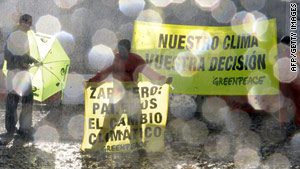 Madrid, Spain (CNN) -- A new international treaty to combat climate change will not be ready when 40 world leaders meet next month in Copenhagen but may be finished next year, a top United Nations official said Friday in Barcelona.

"What we will need after Copenhagen is a little time," said Yvo de Boer, head of the United Nations climate change secretariat. "I don't know how much time to turn that operational language into a treaty, if that is what governments decide."

De Boer told a news conference the Copenhagen meeting could still be a "turning point" in the worldwide fight to reduce emissions that contribute to harmful global warming, but that governments must make their "commitments clear." He added there's no "time to waste."

De Boer spoke at the end of a week of technical-level talks in Barcelona with 4,000 delegates from 180 countries.

He acknowledged that some nations had thought a legally binding treaty could be approved in Copenhagen, but that other nations simply saw Copenhagen as place to agree on future targets that would be worked later into a treaty.

"I think I've said for the past year now that I expect Copenhagen to deliver all the key elements of a new international agreement but that there will always be technical work that will have to be done after Copenhagen to get the treaty finalized," De Boer said.

British Prime Minister Gordon Brown, French President Nicolas Sarkozy and various African and Caribbean heads of government or state are among the 40 world leaders who have said they plan to attend the Copenhagen meeting, De Boer said.

The treaty would replace the existing Kyoto Protocol to curb emissions that contribute to global warming.

De Boer called on the United States, which has not signed the Kyoto Protocol, to offer a national target for reducing global warming emissions and join the new treaty.

President "Obama has committed to showing action and leadership on climate change," De Boer said. "I'm quite confident that the president of the United States can offer a target that would not be alien to what the Senate and Congress have in mind."

The U.S. Senate is expected to consider legislation early next year that could include an emissions-reduction target.

The Intergovernmental Panel on Climate Change wants industrialized nations to cut emissions by between 25 and 40 percent by 2020, based on their 1990 emissions levels. The IPCC, established by the United Nations Environment Programme and the World Meteorological Organization, is the leading body for assessing climate change.

But various wealthy countries, including the United States, have yet not committed to those numbers, which would be part of the legally binding new global treaty.

Some African and other developing nations walked out of the Barcelona talks, arguing that they were being asked to do too much while some industrialized countries were reluctant to make politically difficult commitments on reducing their own emissions.

"I fully understand the frustration by African countries earlier this week," De Boer said. "There is a strong sentiment that poorer countries are not reaping the benefits of Kyoto and negotiations to change that are not moving fast enough."

The Barcelona talks were the last formal multination negotiations before the Copenhagen meeting next month.

A U.S. official told CNN the Barcelona talks were a "stepping stone" toward the eventual new binding treaty, and that delegates in Barcelona aimed to narrow down and focus numerous documents on the table toward a more streamlined binding treaty.