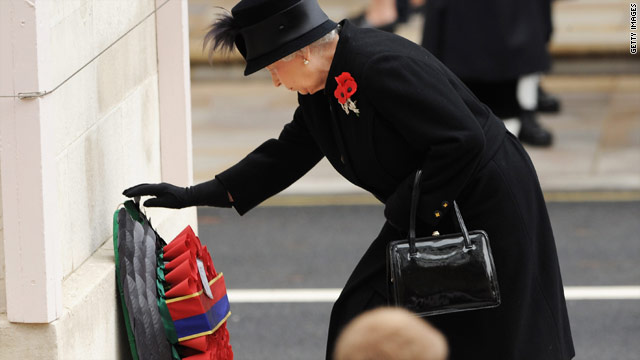 LONDON, England (CNN) -- Central London fell silent save for the tolling of Big Ben as the United Kingdom honored the dead of wars past and present on Remembrance Sunday.

Queen Elizabeth II then laid a wreath at the Cenotaph, the war memorial on Whitehall near Parliament, after a military band played the "Last Post."

Other members of the royal family, including her husband, Prince Philip, and grandchildren Princes Harry and William, followed suit under steel-gray skies as Britain marked a tradition going back to the end of World War I. Harry was representing his father Prince Charles, the heir to the throne, who is in Canada.

Hours before the ceremony began, the Ministry of Defence announced the 200th British soldier had been killed in hostile action in Afghanistan.

Video: Afghanistan and the UK

The soldier, from the 2nd Battalion, The Rifles, was killed in an explosion in Helmand province, the main British area of operations, in southern Afghanistan.

That was then followed by the news that another soldier from 4th Battalion, The Rifles, died from injuries sustained in an explosion that happened in the same region near Sangin.

Both soldier's families have been informed, the Ministry of Defence said.

An American soldier was also killed in an insurgent attack in western Afghanistan, the International Security Assistance Force said in a statement.

The event was not related to an ongoing search for two U.S. Army paratroopers, who went missing Wednesday near Afghanistan's border with Turkmenistan, ISAF said. The service member's name was not released.

The country honors war dead each year on the Sunday closest to November 11, the day World War I ended in 1918.

The memorials this year come as many Britons question the country's military mission in Afghanistan.

The UK has about 9,000 troops there, the second-largest contingent after the United States.

Sunday marked the first Remembrance Sunday since the death of the last two British World War I veterans living in the U.K., Harry Patch and Henry Allingham. Patch, 111, and Allingham, 113, died within a week of each other in July.

Brown and other political leaders laid wreaths after the royal family at the Cenotaph, a memorial designed by the eminent early 20th-century architect Edward Lutyens. Diplomats from countries that used to be part of the British Empire followed, as did uniformed and civilian leaders of the British military.

Rows of uniformed veterans stood on Whitehall for the service, wearing red paper poppies in their lapels. The Royal British Legion sells the paper poppies every year to raise money for veterans' causes. They are ubiquitous across the country in the weeks leading up to Remembrance Sunday.

The ceremony lasted about 20 minutes from the moment of silence at 11 a.m. (6 a.m. ET) through the singing of "God Save the Queen" after a short service led by the Bishop of London, Richard Chartres.

After the royal family left the memorial, military veterans and members of the public also walked past the Cenotaph.