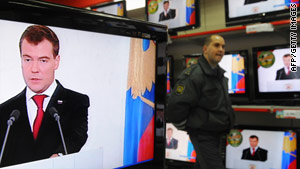 MOSCOW, Russia (CNN) -- In his annual state of the nation speech Thursday, Russian President Dmitry Medvedev painted his vision for the country's future, saying that "modernization" was the key to its "very survival."

The term "modernization" was repeated several times in Medvedev's one-hour-and-40-minute-long discourse, which was held in the Kremlin's St. George's Hall.

Top government officials and members of both houses of parliament were in attendance, and the address was carried live on Russian television.

Medvedev admitted Russia is "staying afloat" today largely thanks to its Soviet-era oil and gas production facilities, nuclear weapons which protect the country and its industrial and housing infrastructure, which he admitted are "becoming increasingly obsolete."

And Russia's "shameful" dependence on the prices for its raw material exports, according to Medvedev, is the reason why it was hurt harder by the global economic crisis than many other countries in the world.

In the 21st century, he said, the world's largest country in terms of land will undergo a major modernization to once again achieve "a world power status" based on new principles.

"Instead of the primitive raw material economy, we will create a smart economy generating unique knowledge, new useful things and technologies. Instead of the archaic society, in which the leaders think and make decisions for everyone, we will become a country of intelligent, free and responsible people," he said.

The Russian president named several areas in need of breakthroughs to make his country a post-industrial one: the facilitation of Internet broadband and 4G communications, a new cluster of orbital satellites, space technologies, new-generation nuclear reactors and sophisticated medicine.

In the military arena, Medvedev said the Russian Armed Forces will be re-equipped with new types of military hardware.

"Next year, we need to supply to the army over 30 ground-based and sea-based ballistic missiles, five Iskander missile systems, some 300 armored vehicles, 30 helicopters, 28 combat planes, three nuclear submarines, and one combat ship," he explained. In addition, he said, three large military training centers will be opened near Moscow and St. Petersburg before the end of this year.

Medvedev also said Russia's foreign policy should focus on the country's modernization and be "extremely pragmatic." The criteria of determining its success, Medvedev said, is whether it facilitates the improvement of the living standards in Russia.

"We shouldn't puff out our cheeks, as the saying goes. We are interested in capitals, new technologies and modern ideas flowing into the country. And we know that our [foreign] partners too, are counting on closer ties with Russia to resolve their own priority tasks," he said.

The contents and the overall tone of Medvedev's address contrasted his speech from last year in several ways.

On November 5, 2008, just hours after Barack Obama was elected U.S. president, Medvedev delivered a tough Cold-war style message, blaming the United States for the war in Georgia and the global financial crisis. He also announced plans for the deployment of missiles in western Russia as a military response to U.S. plans to deploy missile-defense facilities in Poland and the Czech Republic, former Soviet satellites that are now NATO members.

And unlike all previous annual Russian presidential addresses, the contents of which were kept secret until the very moment of their delivery -- including his own in 2008 -- Medvedev published the concept of his 2009 address in September.

In an article titled "Go, Russia!," he attacked the country's economic backwardness, its "primitive" and "humiliating" dependence on raw materials exports and its "chronic" and ubiquitous corruption.

In that same article, Medvedev, known as an avid Internet proponent, invited government officials, party activists and, above all, regular Russians to discuss the country's most acute issues and propose their ideas for improvements. The president asked that ideas be sent to his email address, kremlin@gov.ru .

According to the Kremlin press office, almost 19,000 comments came in after the article's publication on September 10.

Thursday's speech was Medvedev's second state of the nation since he became president, and the 16th in modern Russian history.

Such addresses are stipulated in the latest Russian Constitution, which was adopted in 1993, and have become regular event since 1994.