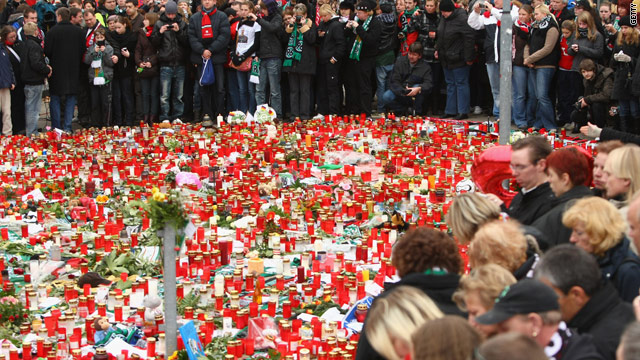 (CNN) -- Thousands of fans, many weeping, packed a Hannover, Germany, stadium Sunday to pay their last respects to Robert Enke, captain of the Hannover 96 soccer club, who died last week in what police believe was a suicide.

Footage from the event showed Enke's flower-bedecked coffin carried through the stadium to the accompaniment of Bette Midler's song "The Rose" as the crowd cheered. Many of the spectators waved Hannover 96 banners as they wiped tears from their eyes.

Enke, 32, was the goalkeeper for both Hannover 96 and the German national soccer team. He died Tuesday about 6:25 p.m. after he apparently stepped in front of a train.

He had played in eight games for the team and was widely expected to be the German team's goalkeeper in the 2010 World Cup.

The stadium funeral service followed another memorial in a church and a mourning march through Hannover initiated by fans, the team said in a statement on its Web site.

"Robert's wife Teresa has expressed the wish to have all his friends and fans of her deceased husband bid farewell to him in the AWD Arena," the statement said. "Hannover 96 supports Teresa Enke in her wish to have Robert and his friends, fans and teammates part with one another in an appropriate and worthy setting."

"A few days have passed since Robert's tragic death, but our inner shock remains," the team said. "One thing is certain: We are not alone in our sadness. Robert Enke was not only perceived by you as a successful football player but above all as a special human being."

Funeral speakers included German football league president Theo Zwanziger, the team said, as well as team chairman Martin Kind and other dignitaries. Afterward, the team said Enke would be laid to rest "in the presence of (his) closest family members."

Teresa Enke told reporters following Enke's death that her husband had been battling depression for six years, but had kept his condition from being public knowledge. He left a suicide note, she said.

The Enkes' biological daughter, Lara, died in 2006 at the age of 2 from a heart condition. The couple recently had adopted an 18-month-old girl they named Leila.

I tried to be there for him, said that football is not everything.
--Teresa Enke

"I tried to be there for him, said that football is not everything," Teresa Enke said. "There are many beautiful things in life. It is not hopeless.

"We had Lara, we have Leila," she said. "I always wanted to help him get through it. He didn't want (the depression) to come out because of fear. He was scared of losing Leila." Have you lost a loved-one to suicide? Share your story

Fellow players said they knew Enke had been struggling. "He was unstable," Kind said just after his death. "But he kept it under wraps.

In the wake of Enke's death, the German national soccer team canceled its friendly match with Chile on Saturday.

Hannover 96 is currently 10th in Germany's Bundesliga top division. Enke had been capped by his national side eight times since making his debut at age 29. The shot-stopper had also appeared for teams including Carl Zeiss Jena, Borussia Monchengladbach, Benfica, Barcelona, Fenerbahce and Tenerife in Spain.