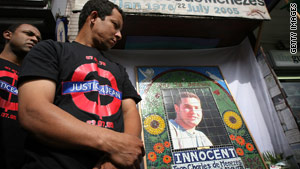 London, England (CNN) -- Police in London have reached a settlement with the family of Jean Charles de Menezes, whom officers shot dead in 2005, mistaking him for a suicide bomber.

The police offered "a further unreserved apology" for the death of de Menezes in 2005, plus an undisclosed compensation package, the police and the de Menezes family said in a joint statement.

"All litigation between them arising out of the tragic death of Jean Charles de Menezes has been resolved," the statement added.

De Menezes was killed on a London Underground train weeks after four suicide bombers struck on the London transport system on July 7, 2005.

The controversial shooting of the unarmed Brazilian man sparked a number of investigations, including one that found police acted illegally.

A jury found in 2007 that London's Metropolitan Police Service broke health and safety laws in the shooting. It did not examine the cause of death.

But the coroner at the inquest, who acted as the judge, had told the jury members they could not return a verdict of unlawful killing.

They returned an open verdict in the case, meaning the jury was unable to establish a cause of death. De Menezes' family called the proceedings a "whitewash" because jurors were not allowed to consider a verdict of unlawful killing.

The city was on edge as police sought the four failed bombers.

Officers staking out a home in south London saw and followed de Menezes, 27, believing he was one of the suspects. They trailed him as he traveled on a bus and into a subway station, where they chased him onto the platform and into a train, and shot him dead.

The Independent Police Complaints Commission concluded in 2007 that de Menezes was innocent of anything that might have justified police action.

"We made a most terrible mistake," Acting Police Commissioner Paul Stephenson said at the time, adding police needed to learn from the incident. "I am sorry."

The shooting was one of several issues that led to the resignation last year of Police Commissioner Ian Blair.

CNN's Melissa Gray in London contributed to this report.