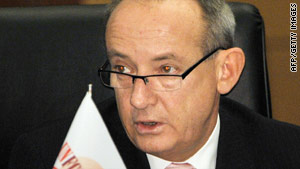 London, England (CNN) -- The United Nations' top climate official has urged countries to come to a clear and unified agreement at next month's climate conference in Copenhagen.

Speaking 11 days before the start of the crucial talks at a press conference in Bonn, Germany, Yvo de Boer, United Nations Framework Convention on Climate Change (UNFCCC) executive secretary said: "The stakes are too high for tactical maneuvering. The stakes are too high for any country to be focusing on national agendas. There is no time to lose."

De Boer called on countries in both the industrialized and developing world to clearly state in "black and white" what their emissions cuts will be by 2020. "This includes the U.S.," de Boer said.

He welcomed the recent pledges by Brazil and South Korea to cut their emissions up to 39 percent and 30 percent respectively. But he said the onus must be on industrialized nations to give the final push towards agreement, calling for them to provide "ambitious leadership."

In addition, De Boer said that the short and long-term finance to support mitigation and adaptation in the developing world must be clarified at the conference.

"Rich countries must put at least $10 billion on the table to kick-start immediate action up to 2012. And they must list what each country will provide and how funds will be raised to deliver very large, stable and predictable finance in the future, without having to constantly negotiate it every few years," he said.

"Copenhagen can and must deliver an agreement that launches immediate action in developing countries to adapt to the impacts of climate change and put them on a clean energy path."

Have your say at COP15 -- join the CNN YouTube debate

He welcomed the announcement Wednesday of President Obama's intention to attend the Copenhagen climate talks saying his presence was "critical to a good outcome."

"There is no Plan B for failure at Copenhagen only Plan A, and A stands for action," he said. "All countries must use the remaining eleven days to Copenhagen to take work forward in a spirit of cooperation and compromise."