310 evacuated after huge fire in London 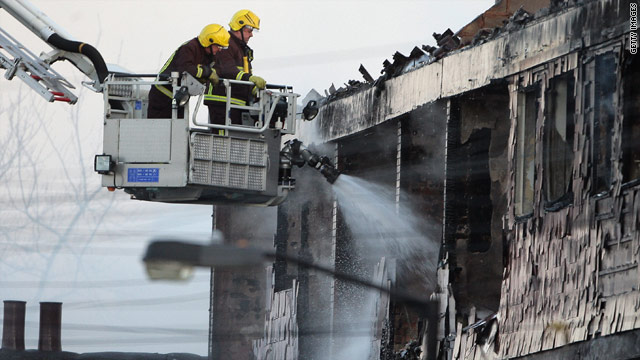 London, England (CNN) -- Authorities evacuated 310 people from their homes early Thursday because of a major fire at a building site and nearby apartments in south London, fire officials and police said.

The London Fire Brigade said it was called to the scene at 4:26 a.m. (11:26 p.m. ET Wednesday), and police said they were called minutes later. Ten fire engines and around 75 firefighters were on the scene some eight hours later, a spokesman for the fire brigade said.

The fire engulfed an entire building site in Peckham, an area of south London, and spread to several three- and four-story residential buildings in the area, police and fire officials said.

Firefighters had the fire surrounded by noon and said there may still be deep-seated pockets of fire, a fire brigade spokesman said.

Four people were taken to a hospital, mainly for smoke inhalation, a spokeswoman for the London Ambulance Service said. None of their conditions was serious, she said.

"I was in bed and my neighbor knocked and told me to wake up -- the building's on fire," said one woman wrapped in a coat on a nearby street.

It was not clear what started the fire, the fire brigade spokesman said.