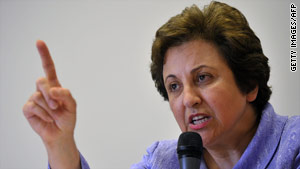 "The medal and the diploma have been removed from Dr. Ebadi's bank box, together with other personal items. Such an act leaves us feeling shock and disbelief," Norwegian Foreign Minister Jonas Gahr Store said in a written statement.

Norway did not explain how it had learned of the alleged confiscation, and there was no immediate reaction from Iran.

Norway's Ministry of Foreign Affairs said in a written statement that it "has reacted strongly" and summoned the Iranian charge d'affaires on Wednesday afternoon to protest the move.

During the meeting with the Iranian charge d'affaires, State Secretary Gry Larsen also expressed "grave concern" about how Ebadi's husband has allegedly been treated.

"Earlier this autumn, he [Ebadi's husband] was arrested in Tehran and severely beaten. His pension has been stopped and his bank account has been frozen," the statement from Norway said.

Store said in the statement that it marked the "first time a Nobel Peace Prize has been confiscated by national authorities."

The peace prize is one of five awarded annually since 1901 by the Nobel Foundation in Stockholm, Sweden. The other four prizes are for physiology or medicine, physics, chemistry and literature. Starting in 1969, the Sveriges Riksbank Prize in Economic Sciences in Memory of Alfred Nobel also has been awarded.

While the other prizes are awarded by committees based in Sweden, the peace prize is determined by a five-member panel appointed by the Norwegian parliament.

Ebadi received the prize for her focus on human rights, especially on the struggle to improve the status of women and children.

A statement from the Nobel committee at the time said, "As a lawyer, judge, lecturer, writer and activist, she has spoken out clearly and strongly in her country, Iran, and far beyond its borders."