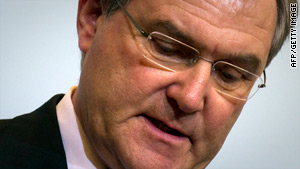 It comes the day after the head of the German army stepped down over the same incident.

The resignation of Gen. Wolfgang Schneiderhan, the army's chief of staff, came after Germany's Bild newspaper reported he knew civilians could be killed when the Sept. 4 airstrike was ordered.

The attack in the northern province of Kunduz killed at least 90 people, according to reports at the time. Bild said 142 people were killed. Local Afghan officials said at least half of the dead were civilians, and NATO acknowledged soon afterward that civilians had been killed.

NATO said the death toll is contained in a classified report about the incident that is now in the hands of German authorities.

The German commander in the area called in the strike after Afghans tried to siphon fuel from two tankers hijacked by the Taliban a day earlier. The fuel had been earmarked for NATO's International Security Assistance Force (ISAF).

Bild said it had access to confidential documents and it posted a video of the airstrike on its Web site. It said German Col. Georg Klein was not able to rule out the possibility of civilian victims before he ordered the strike.

The newspaper said a report dated Sept. 6 -- two days after the strike -- made clear that it was impossible for Klein to verify information his informant had provided before he called in the airstrike.

Jung said Friday he was taking responsibility for miscommunication following the incident.

Bild reported that for days after the incident, Jung -- who was then defense minister -- repeated that there had been no civilian victims. That was despite Jung having videos and documents that proved the defense ministry knew about civilian victims and also had insufficient information before the strike was ordered, Bild said.

"Although this information painted a completely different picture of events, Minister Jung repeated in newspaper interviews and before Parliament, again and again, that 'terrorist Taliban exclusively' had been hit, and that the local commander had had 'clear information' that the people by the tankers were exclusively insurgents," Bild reported.