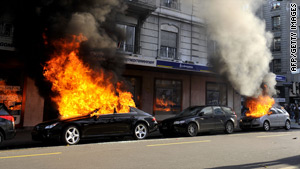 (CNN) -- Violence erupted in the Swiss city of Geneva Saturday as a scheduled peaceful protest of a World Trade Organization conference turned violent and police had to use tear gas and rubber bullets.

Thirty-three arrests have been made and police were on the streets working to maintain order, authorities said. There was one minor injury reported: An 80-year-old woman in a walker suffered a head bruise when she fell during the tumult of the demonstrations.

The demonstration started around 2:30 p.m. (8:30 a.m. ET) and about 3,000 people turned up in the central part of town, Geneva police spokesman Patrick Puhl told CNN. World Trade Organization ministers will hold a conference next week.

"There were three groups who came seeking violence," Puhl said.

"The troublemakers quickly began attacking banks, hotels and shops, smashing windows and burning four cars, so we had to stop them using tear gas and rubber bullets," Puhl told CNN.

The general theme for discussion at the conference is "The WTO, the Multilateral Trading System and the Current Global Economic Environment."