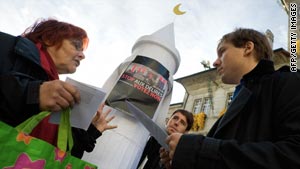 A passer-by argues with politicians carring a mockup of a minaret at a protest against the referendum in Lausanne.
STORY HIGHLIGHTS

(CNN) -- Swiss voters on Sunday adopted a referendum banning the construction of minarets, seen by some on the far right as a sign of encroaching Islamism.

"The Federal Council respects this decision," said a statement from Switzerland's government. "Consequently the construction of new minarets in Switzerland is no longer permitted. The four existing minarets will remain.

"It will also be possible to continue to construct mosques," the government statement said. "Muslims in Switzerland are able to practice their religion alone or in community with others, and live according to their beliefs just as before."

As of 10 a.m. ET, 57 percent of voters had cast ballots in favor of the ban, according to Swiss media reports.

Minarets are tall spires extending from mosques or built next to them. They help identify a mosque and also serve as a spot where a religious leader can call the faithful to daily prayers.

The move to amend the constitution to ban new construction is part of a campaign by the nationalist Swiss People's Party (SVP).

The party says the minarets are political symbols and therefore go against the the country's constitution.

It designed fliers that feature a veiled woman against a background of a Swiss flag pierced by several minarets resembling missiles.

Switzerland's Federal Council and a majority of members of Parliament opposed the initiative, the government statement said, and officials interpret the vote as reflecting "fears among the population of Islamic fundamentalist tendencies."

"...These concerns have to be taken seriously," the statement said. "The Federal Council has always done so and will continue to do so in the future. However, the Federal Council takes the view that a ban on the construction of new minarets is not a feasible means of countering extremist tendencies."

The SVP has courted controversy with its campaigns in the past. In 2007, it faced international criticism for leading an anti-immigration campaign during the federal election that featured a poster with a white sheep kicking a black sheep off a Swiss flag.

Under party leader Christoph Blocher, it went on to win the biggest share of the vote in the 200-member parliament, taking 55 seats.

Earlier this year, the party issued a poster depicting crows pecking at a map of Switzerland, as the country prepared to vote on whether to support an extension of a free movement of labor deal with the European Union that would include new members Bulgaria and Romania.