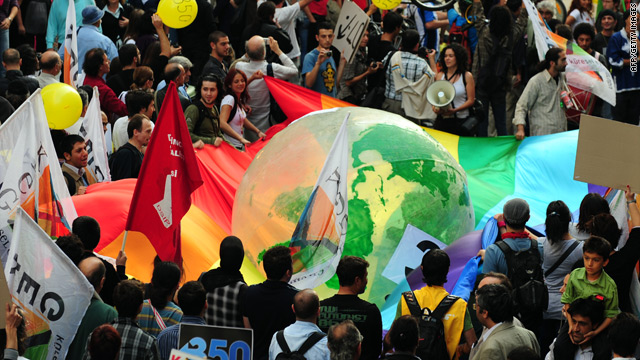 People participating in a 'flashmob' ahead of the U.N.climate change conference in Copenhagen.
STORY HIGHLIGHTS
RELATED TOPICS

(CNN) -- The largest-ever gathering of climate protesters will assemble in Copenhagen this week for the long-awaited COP15 summit, raising the prospect of clashes with authorities as they attempt to highlight their concerns to world leaders.

With up to 50,000 protesters expected to arrive over the 11-day conference, their activities are likely to be as much of a focus as the discussions on climate change taking place within the heavily-guarded venue.

Despite having no access to the venue, activists have pledged to "overcome physical barriers" to deliver their message to delegates who include United States President Barack Obama and China's Prime Minister Wen Jiabao.

While representing a colorful array of perspectives, most of the protesters share a belief that the talks will fail to create adequate proposals for reducing global carbon emissions in time to prevent irreversible climate change.

Campaigners are to appear in all shapes and sizes. From the UK anti-aviation industry group Plane Stupid, to the Indian Social Action Forum collective opposed to genetically modified crops to Brazilian land reform campaigners, the Landless Workers' Movement.

Are you at the COP15 summit?

Particular concerns range from the influence of corporate lobbyists in framing climate policy, the reliability of market-based solutions such as carbon trading, and the fairness of new measures on those worst affected by climate change in the developing world.

Lizzie Jacobs, of UK-based activist network Climate Camp, told CNN her group would be in Copenhagen to highlight the failure of the 1997 Kyoto Protocol agreement on emissions reduction.

"This is an undemocratic, Western-centric process that has consistently failed to meet its already insufficient targets, and has actually led to increased emissions. We're traveling to Denmark because we don't have faith in this process and we want to highlight the alternatives."

What is at stake at Copenhagen?

Beginning Friday there will be a week-long series of coordinated actions sprouting up across Copenhagen.

Video: 'This is our chance'

These will range from eye-catching spectacles like the "Bike Bloc," where activists will build a mammoth "resistance machine" made from recycled bicycles; to the "Flood for Climate Justice" mass rally on December 12 devised by environmental group Friends of the Earth to emphasize the so-called "climate debt" owed to the southern hemisphere by the polluting north.

A vast and influential network known as Climate Justice Action (CJA) are also coordinating what is probably the most hotly-anticipated action of the week.

Set to coincide with the arrival of world leaders on December 16, the action -- provocatively titled 'Reclaim Power' -- will be an attempt by activists to hijack the conference for one day and transform it into a "People's Assembly."

"The intention of the Reclaim Power day," says British-based climate activist Robert Tyler, "is to enter the conference and put our agenda on the table. This is an agenda that recognizes indigenous land rights, that recognizes the damage done by our economic system to countries around the world."

It is not clear how CJA members could succeed in breaking through the highest levels of security.

While the U.N. has specifically requested that protesters be allowed near the heavily-guarded 15,000-capacity venue, demonstrations will, say Danish police, be halted at least 300 meters away.

"History has shown us that when there is a need for radical social change, asking those in power nicely to relinquish some control doesn't get us very far.
--British activist Dan Glass

Although this raises the prospect of violent confrontations, the CJA maintains it is committed to "non-violent civil disobedience."

A statement on the network's Web site reads: "We will overcome any physical barriers that stand in our way -- but we will not respond with violence if the police try to escalate the situation, nor create unsafe situations."

Dan Glass, an activist who made headlines in 2008 after gluing himself to British Prime Minister Gordon Brown told CNN the risks of injury and of breaking the law -- such as those witnessed during the WTO Seattle protests 10 years ago -- are justified under certain conditions.

"History has shown us that when there is a need for radical social change, asking those in power nicely to relinquish some control doesn't get us very far. Women wouldn't be voting in Britain without the suffragettes and Mandela would still be in jail if it wasn't for direct action against apartheid."

However, for those seeking a less combative Copenhagen experience, there is an alternative summit that runs parallel to the executive one. Situated in the city center and financed by the Danish government at an estimated cost of 1 million krona ($200,000) Klimaforum09 is billed as "the global civil society counterpart to the U.N. conference."

Forum spokesman Richard Steed informs CNN that he expects around 10,000 visitors a day.

As well as an elaborate cast of international speakers, including anti-globalization activist Naomi Klein and the radical Indian environmentalist Vandana Shiva, Steed says that the Klimaforum will provide an opportunity for open debate and discussion among all participants.

"The grassroots activism in Copenhagen will not just be about opposition, it will be about forming new connections and finding solutions. From ways to keep fossil fuels in the ground, to ways of repaying our ecological debt to the peoples of the South -- if the Copenhagen summit achieves nothing else it will be a resurgence of new ideas."