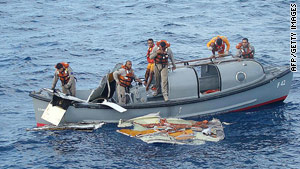 Paris, France (CNN) -- French investigators said they are looking into problems encountered by an Air France jet last month in nearly the same spot over the Atlantic where another Air France jet mysteriously crashed in June.

Air France flight 445 was flying from Rio de Janeiro, Brazil, to Paris, France, the night of Nov. 29 when it encountered the problems, the French accident investigation agency, BEA, said in a news release this week.

It is the same route taken by Air France flight 447 when it went down in the Atlantic Ocean in stormy weather June 1, killing all 228 people aboard. The investigation agency has not established the cause of the crash, and large parts of the plane -- including both flight recorders -- have never been found.

"The analysis of what happened could lead to complementary explanations about the accident of flight AF 447," the investigation agency said.

Flight 445 encountered "severe turbulence" about four hours after takeoff on Nov. 29, forcing the pilots to descend, Air France said in a statement after the flight.

The crew sent out an emergency radio message to indicate it had left its flight level, Air France said.

The flight, with 215 people aboard, "continued normally" after half an hour of moderate to severe turbulence, the airline said.

Air France declined to comment on the investigation agency's statement this week.

While French authorities have not yet determined what caused the June crash, tests have brought into question the performance of pitot tubes, which are used to measure the pressure exerted on the plane as it flies through the air, and are part of a system used to determine air speed.

Flight 447 sent out 24 automated error messages before it crashed that suggested the plane may have been flying too fast or too slow through the thunderstorms, officials have said.

The European Aviation Safety Agency (EASA) issued a directive in late August requiring airlines to replace pitot tubes manufactured by Thales Avionics on Airbus A330s and A340s. It said airlines should replace them with other Thales tubes and those manufactured by Goodrich.