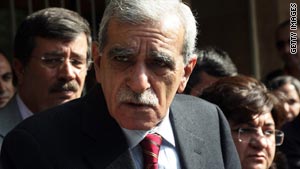 Istanbul, Turkey (CNN) -- Tensions between Turkey and the country's main Kurdish political party crackled further Saturday, with the group promising a boycott of parliament sessions a day after a court ruled to ban the movement.

A Democratic Society Party leader, Ahmet Turk, said the 19 remaining lawmakers from the party, known as the DTP, would be "practically withdrawing from the parliament," even though he stopped short of saying the parliamentarians will resign.

"We will not be attending the parliament sessions," he said.

If they don't resign, the remaining DTP parliamentarians could remain as lawmakers under another affiliation.

Constitutional Court judges ruled unanimously Friday to shut down the Democratic Society Party for being a "focal point for terrorism against the indivisible integrity of the state."

The move raised questions about the future of the so-called "democratic opening" to the Kurds -- the package of reforms proposed by the ruling Justice and Development Party, or AKP, aimed at reconciliation with the Kurdish population.

The court's ruling stripped the party's co-chairs, Turk and Aysel Tugluk, of their parliamentary seats and banned them from political activity for the next five years. Nearly three dozen founders and members of the party also were banned from participating in politics for five years.

Calling the court's decision strictly political, Turk blamed the AKP for staying silent as his party was being stripped of power, saying the ruling party "is a democratic party only for themselves."

"The decision by the Constitutional Court that aims to protect the status quo and the official ideology has been a blow to our belief in peace," Turk said. "This is not a legal decision, but it is a political one."

The Kurds are Turkey's largest ethnic minority, numbering more then 12 million people. For many years, the Turkish state denied their existence, calling them "mountain Turks."

Turkey has been locked in a bloody conflict with separatists from the Kurdistan Workers' Party, or PKK, since the early 1980s. More then 30,000 people, mostly ethnic Kurds, have been killed in the conflict.

In recent years, the Turkish government has made moves to relax tight restrictions on the use of Kurdish language in schools and media, part of what is called the "democratic opening." This year, Ankara, Turkey, for the first time launched a state Kurdish-language TV channel, TRT 6.

But despite government plans to unveil a new set of of democratic reforms, tensions have mounted between Kurdish and Turkish nationalists.

Turkish nationalists have long accused the Democratic Society Party of working with the Kurdistan Workers' Party, which has been labeled a terror organization by the United States and the European Union. While the DTP does not denounce the actions of the PKK, it insists it is a separate party.

For more then a week, Kurdish youths have clashed with Turkish police across the country, throwing stones and Molotov cocktails. Turkish security forces have used tear gas and made scores of arrests.

Many rioters have been upset over reports about the treatment in prison of Abdullah Ocalan, the now-jailed founder of the PKK.

And in what marked a serious escalation of violence, rebels on Monday ambushed a Turkish gendarme vehicle in central Turkey, killing seven paramilitary troops. The PKK has since claimed responsibility for the attack.

After the court ruling, small groups of protesters took to the streets of Diyarbakir on Friday night, smashing windows in the predominantly Kurdish city. Police were out in force there and halted protesters from approaching the AKP headquarters in the city, a witness told CNN.

There were also reports of disturbances in Kurdish towns of Hakkari and Van provinces on Saturday.

Since the ruling, voices in Turkey and abroad have weighed in on the ban.

The presidency of the European Union, which Turkey has long been seeking to join, expressed its "concern" over the court moves.

"While strongly denouncing violence and terrorism, the Presidency recalls that the dissolution of political parties is an exceptional measure that should be used with utmost restraint," the EU said in a statement on Friday.

Suat Kiniklioglu, an AKP parliament member and spokesman of the parliamentary foreign affairs commission, said the "Constitutional Court has been very thorough and has found an organic link between DTP and the PKK."

"We have to respect the court's decision," Kiniklioglu said.

Kiniklioglu said the DTP's lack of political independence has impeded progress in achieving democratic reforms, but he believes the "democratic opening" process will continue, despite the persistent street violence.

"Closing down the DTP will not have a direct effect on the process. The determination of the party and the prime minister will continue," he said, referring to Prime Minister Recep Tayyip Erdogan.

Analysts have questioned the government's will to pursue the democratic reforms.

He believes the AKP has been slow in initiating reforms and the DTP was not able to present itself as a civilian alternative to the PKK.

"I don't think the process will end completely. Even if it is not directly related with the government, the EU will see the closure of DTP as a bad point in terms of democracy. The AKP has to take certain steps within its course with the EU. These will be steps related with cultural rights, however they will be minimal," he said.

"Unfortunately, clashes may increase, although I don't think it will be a return to the '90s. The rallies may continue in the southeast," he said, referring to the predominantly Kurdish area of Turkey.

Dogu Ergil, a professor of political science at Ankara University, said the closing of the DTP won't have a major political impact because the movement doesn't have the influence militants do. But the banning will have "a major psychological effect."

"It will be an excuse for those who support and manipulate the idea that Kurds cannot be involved in politics in regular ways," he said.

He said the PKK is trying to sabotage democratic reforms with its violent resistance, a reflection of its opposition to democracy and politics. That makes it crucial for the ruling party to respond with true reforms, he said.

"There is only one way for AKP to go now. They cannot go back and they cannot just stay where they are. The only way is to move forward. They have to come up and execute a real democratic opening package now," Ergil said.