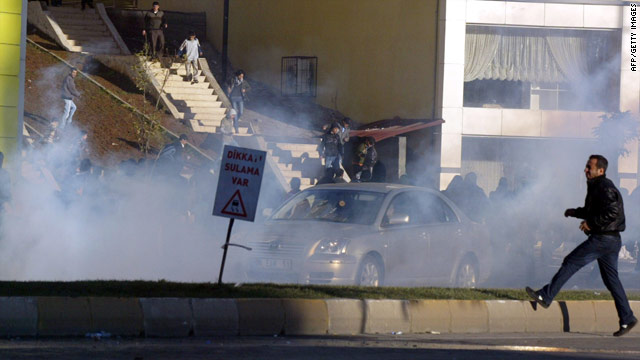 "They were throwing stones," said Ziya Akkaya, the mayor of Bulanik from the recently banned Kurdish party known as the Democratic Society Party, or DTP. "Then this shopkeeper pulled out an automatic weapon and killed two people and wounded eight."

After the shooting," Akkaya told CNN, "the demonstrators burned the man's shop."

The alleged shooter has been detained by authorities, the semi-official Anatolian news agency reported. The dispatch said protesters were tossing stones and breaking windows in shops on the street, including the shop belonging to the alleged gunman.

The Mus Province governor's office confirmed that the shooter's shop was burned and that the atmosphere in Bulanik continued to be very tense.

Violent Kurdish demonstrations have erupted in towns and cities across Turkey for more then a week. Kurdish protesters have hurled stones and gas bombs, repeatedly clashing with Turkish riot police who have fired tear gas and water cannons, while making hundreds of arrests.

The tension was exacerbated by a decision last Friday, by Turkey's highest court, to shut down DTP, the country's main Kurdish nationalist political party, on grounds that it had become a "focal point for terrorism."

On Monday, lawmakers from the DTP announced they would submit their resignations to the Turkish parliament.

The clashes have raised fears that the long simmering conflict between the Turkish state and Kurdish separatist rebels could re-ignite. More then 40,000 people, mostly ethnic Kurds, have been killed in the conflict, which has gone on for more then a quarter century.

The Kurds are Turkey's largest ethnic minority, numbering more then 12 million. Turkish analysts fear the latest round of hostilities could derail government promises to relax tight restrictions on the use of Kurdish language in media and schools.