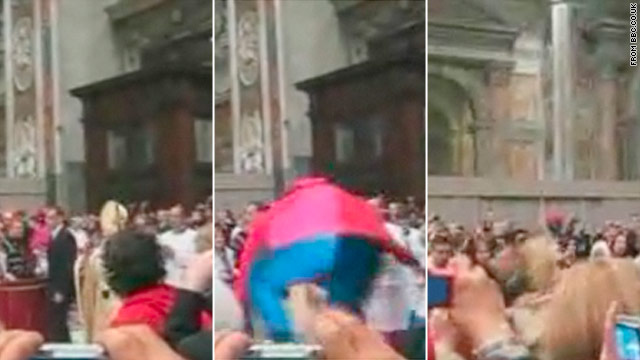 (CNN) -- A woman jumped a barrier at the start of Christmas Eve Mass at St. Peter's Basilica and knocked down the pope, briefly disrupting ceremonies.

Screams erupted from onlooking worshippers when the woman ran toward Pope Benedict XVI and grabbed onto his vestments as he walked down the main aisle of the church, video footage showed.

He was quickly helped to his feet by his aides -- prompting cheers from the crowd -- and the service was resumed, Vatican spokesman Federico Lombardi told CNN.

The woman was removed by Vatican guards, Lombardi said.

Gallery: Christmas Eve around the world

Benedict began what has traditionally been a midnight Mass at the Vatican at 10 p.m. as officials sought to keep the 82-year-old pontiff from a late night.

Celebrants in Bethlehem, the traditional birthplace of Jesus in the West Bank, however, joined the Latin Patriarch Fouad Twal for a midnight Mass attended by Palestinian Authority President Mahmoud Abbas and other Palestinian officials.

Outside the Church of the Nativity, erected over the site Christian tradition says was the place of Jesus' birth, the faithful gathered under the watchful eyes of heavily armed Palestinian police.

But Palestinian shopkeeper Nadia Hazboun said the security situation in the West Bank has improved in the time since the militant Hamas group took over Gaza and Abbas' Fatah movement abandoned the narrow strip of land between Israel and the Mediterranean for the West Bank.

"It was bad, now it is good," he told Voice of America radio. "I told you, before anybody take the law in his [own] hands. But now the law [is] with the police. We have security, we have calm, we have now the best situation in Bethlehem."Were you there? Share pictures, video

Christmas Eve in Bethlehem is a popular destination for American Christians, including Iowan Paul Edelman.

"Just the festivities, the idea that this is the birthplace of Christ, and you get to see all the historic places and share it with people from around the world; it's a very nice experience," he told Voice of America radio.