WASHINGTON (CNN) -- U.S. President Bush laid the blame for recent fighting in Gaza squarely at the feet of Hamas, accusing militants of waging a campaign of violence against Israel with little regard for its people. 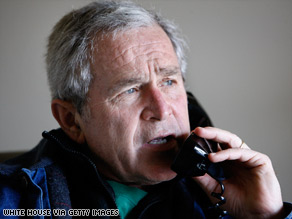 President Bush, pictured in December, says Hamas "has no intention of serving the Palestinian people."

"Since Hamas' violent takeover in the summer of 2007, living conditions have worsened for Palestinians in Gaza," Bush says in prepared remarks released Friday by the White House. "By spending its resources on rocket launchers instead of roads and schools, Hamas has demonstrated that it has no intention of serving the Palestinian people."

In a radio address to air Saturday, Bush says Hamas committed an act of terrorism when it renewed rocket attacks into Israel last month, provoking this week's airstrikes by Israel.

"In response to these attacks on their people, the leaders of Israel have launched military operations on Hamas positions in Gaza," Bush says. "As a part of their strategy, Hamas terrorists often hide within the civilian population, which puts innocent Palestinians at risk."

Palestinian medical sources said Friday that at least 421 people have been killed and 2,200 wounded in Gaza since Israeli air raids began December 27.

Israeli police and military officials say four Israelis have died and 57 have been wounded.

With Israeli tanks and troops massed along the Gaza border as Saturday morning broke, Bush acknowledged the humanitarian toll that the airstrikes have taken upon Gaza's densely packed population.

But Bush does not directly mention the toll that the airstrikes have taken in the address, again blaming conditions in Gaza on Hamas, which has repeatedly called for the destruction of Israel.

Bush said his administration will continue to monitor the situation in Gaza closely and will stay in contact with leaders throughout the region.

President-elect Barack Obama is said to be monitoring the situation. He has been in contact with Secretary of State Condoleezza Rice and Hillary Clinton, the nominee for secretary of state.

"You got involved, and you had a statement regarding the issue of Mumbai, but you did not get involved and say anything about the enemy's crime against Gaza," Meshaal said.

Learn more about Meshaal and other key leaders in the conflict »

Asked Sunday whether a land invasion would change how the Obama administration views Israel, Obama's senior adviser yielded to Bush.

Bush says in his address that "America's objectives in the Middle East will remain clear: We seek security and peace for our allies, the free people of Israel. For the Palestinian people, we seek a peaceful and democratic Palestinian state that serves its citizens and respects its neighbors. For all in the region, we seek an end to terror."

The comments reflected the general tone that the U.S. has historically taken toward Hamas, which the United States and the European Union consider a terrorist group.

In democratic elections in Palestinian territories backed by the United States in 2006, Hamas won a landslide victory in parliamentary voting.

After the elections, the U.S. government asked the Palestinian Authority to return $50 million in donations for infrastructure improvements. The United States cut off direct, nonhumanitarian aid to Gaza but more than doubled humanitarian aid it funnels through non-governmental groups and the United Nations.

Mahmoud Abbas, president of the Palestinian Authority and a member of Hamas' rival Fatah party, dissolved Gaza's Hamas-led government and declared a state of emergency in 2007. Hamas took control of the territory shortly afterward.

Abbas was to travel to New York on Friday to address the United Nations Security Council, his office said.

On Wednesday, the council debated a Libyan-sponsored draft resolution favored by Arab countries that calls for Israel to immediately cease military attacks against civilians and asks for the protection of the Palestinian people.

The United States indicated that it does not back the resolution, though it does support a cease-fire.

Rice said Friday that a "durable and sustainable" cease-fire was needed to end the violence in Gaza and in southern Israel.