(CNN) -- The U.N. Security Council held an emergency meeting Saturday, but failed to agree on a statement in response to Israel's ground offensive launched in Gaza. 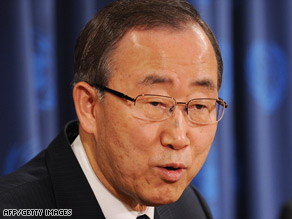 Libyan Ambassador Giadalla Ettalhi, who circulated a draft resolution on the crisis at a Security Council meeting last week, said a proposal, which "strongly condemns Israeli military action" and calls on the Jewish state to immediately cease "military attacks against the civilian population," had wide support among Council members.

However, Ettalhi said the United States was to blame for blocking a consensus.

"Unfortunately, the delegation of the United States a clear position that is against any product or outcome from this meeting," Ettalhi said.

"We shared our view in the root cause ... that is Hamas continues the rocket attacks and violence," Wolff said on Saturday. "We were not able to come to an agreement today."

However, Sawers said on Saturday that Security Council should focus less time on placing blame for the violence on Gaza and "focus on what the (security) council can do."

Earlier on Saturday, the president of the U.N. General Assembly criticized both Israel's ground assault into Gaza and the U.N. Security Council's response to it.

"I think it's a monstrosity; there's no other way to name it," Miguel D'escoto Brockmann of Nicaragua said Saturday when asked about the Israeli incursion launched just hours before. "Once again, the world is watching in dismay the disfunctionality of the Security Council."

Brockmann blamed the weeklong violence in Gaza on the "unfulfilled resolutions of the Security Council," referring to the 1967 resolution that called for lasting peace in the Middle East after the Arab-Israeli War.

"I'm not coming hard on any member state. I'm coming down strongly in defense of the rights of a people that are being subjected to extreme measures by another member," Brockmann said when pressed to clarify his position.

Watch Brockmann respond to the incursion »

"To say the violence now erupted because of some rockets fired by Hamas is to ignore the fact that there's been violence for decades and the very occupation itself of the territory is a violent thing."

On December 28, the day after Israel launched its ongoing airstrikes on Gaza, the council issued a statement calling for an immediate cease-fire.

Despite pleas directed at both sides from the international community for a cease-fire, Israeli tanks rolled into Gaza Saturday night. At least four Palestinians have been killed as a direct result of the ground attacks, bringing the death toll in Gaza to 460.

Hamas rockets have killed four Israelis since the conflict erupted last Saturday, according to Israel.

Earlier Saturday, U.N. Secretary-General Ban Ki-moon expressed concern over the start of the ground offensive, saying it complicates the international community's efforts to achieve a cease-fire between the Jewish state and Hamas.

Ban "conveyed his extreme concern and disappointment" to Israeli Prime Minister Ehud Olmert, a spokesman for the secretary-general said.

"He is convinced and alarmed that this escalation will inevitably increase the already heavy suffering of the affected civilian populations."

Ban renewed his call for an immediate cease-fire and condemned the continued rocket attacks by Hamas.

After a week of pounding Gaza with airstrikes, Israeli launched the second phase of an offensive meant to end rocket attacks staged in the Hamas-ruled territory. The incursion happened just hours after the European Union announced that a delegation is heading to the Middle East to meet with leaders from the region and seek a cease-fire.

A broader Middle East "Quartet" -- consisting of the European Union, the United States, the United Nations and Russia -- is also trying to broker a truce.

"Today's developments complicate the efforts of the Quartet and others to end the violence," Ban's spokesman said.

A statement from the French government conveyed a similar message, saying the ground assault "complicated the efforts" of the European Union, the Quartet, France and others seeking an immediate cease-fire.

Monday's meeting will include members of the European Union leadership and French President Nicolas Sarkozy, whose country just finished a six-month EU presidency. The Czech Republic, which took over the role from France, will lead the delegation, the Czech presidency said.

The officials will try to start a dialogue between the EU and Middle East to look for ways of re-establishing armistice in Gaza, the Czech presidency said. They will also be looking for ways to provide humanitarian aid to people in Gaza.

The delegation heads to Egypt on Sunday for a meeting with Foreign Minister Ahmed Aboul Gheit. They will hold a full day of meetings in Israel and the West Bank on Monday, and on Tuesday, they head to Jordan to meet with Prime Minister Nader al-Dahabi.

Europe's stepped-up initiative came as the United States continued to stay out of the current Middle East spotlight.

Secretary of State Condoleezza Rice said Washington is talking with European, Israeli and Arab partners to find a "sustainable" solution in Gaza. But at this point, Rice has no plans to head to the region.

The White House has declined to comment on whether an Israeli ground incursion would be justified. In his weekly radio address, President Bush laid the blame for the recent fighting squarely at the feet of Hamas.

The White House and the State Department have also refused to comment on reports that some diplomats are suggesting international monitors be brought into Gaza as part of any peace deal.