JERUSALEM (CNN) -- Blasts of heavy machine-gun fire and explosions from airstrikes filled the air in Gaza early Sunday morning, hours after Israel rolled thousands of troops into the Palestinian territory. 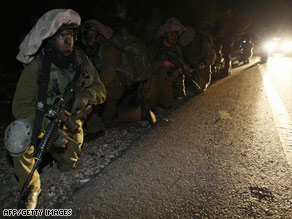 Israeli soldiers on the Israeli-Gaza border wait to enter Gaza on Saturday night.

At least four Palestinians have been killed as a direct result of the ground assault, Palestinian medical sources said, bringing the death toll in Gaza to 460 since the conflict erupted December 27.

The ground assault followed a weeklong campaign of airstrikes in what Israel says is an offensive to halt rocket attacks from Hamas militants in Gaza.

"We want to create a situation where the civilian population in southern Israel is no longer on the receiving end of those deadly Hamas rockets," Israeli government spokesman Mark Regev told CNN.

"We haven't articulated regime change as the goal of this operation. Our goal is to protect our people," Regev said.

Israeli officials say four people have been killed and 59 wounded in Hamas rocket attacks in the past week.

As night fell on the eighth day of the bloody conflict, both sides remained defiant, vowing to stand their ground and accusing the other of breaking a cease-fire that had been in place until last month.

As the ground attack began, Hamas rockets continued to fly into southern Israel, with CNN reporters at the Israel-Gaza border seeing and hearing several of them.

The Israeli ground attack deepened a humanitarian crisis in Gaza that has been decried by international observers, including the United Nations.

The spokesman said Ban "is convinced and alarmed that this escalation will inevitably increase the already heavy suffering of the affected civilian populations," according to a statement.

Electricity, food and medical shortages already were a problem in the densely populated territory, concerns ramped up by the airstrikes.

Taghreed El-Khodary, a New York Times writer in Gaza City, said that there was no electricity there Saturday and that she said she didn't know of any shelters set up by Hamas for residents.

An Israeli airstrike hit a mosque in the northern Gaza village of Beit Lahiya on Saturday evening, killing 13 people and wounding 60, according to Palestinian medical sources.

Watch the chaos after the mosque attack »

The houses of two alleged Hamas terrorist operatives were also hit, the IDF said. One was the home of Azadin Hadad, described as the head of the Hamas military group in eastern Gaza City.

The other, in Beit Lahiya, was used to store rocket-launching equipment and was the home of Ismail Renam, who "has a central role in the launching of Grad-type rockets against Israel," the IDF said.

Rockets set a house on fire in Ashkelon, damaged a kibbutz dining hall and slightly wounded two people in an eight-story building in Ashdod, according to Israeli ambulance services.

"We still see that Hamas is targeting Israeli civilians. Namely, we still did not reach the goal of crippling Hamas' launching capabilities," Leibovich said.

The incursion began just hours after the European Union announced that a delegation is heading to the Middle East to meet with regional leaders and broker a cease-fire.

A Middle East "Quartet" consisting of the European Union, the United States, the United Nations and Russia is also trying to broker a truce.

Hamas, an Islamic fundamentalist group that came into being in 1987, won by a landslide in parliamentary elections in Gaza in 2006. Months later, Hamas militants began attacking Israeli military posts and fighting with members of Fatah, the rival political party that controls other Palestinian territories.

Palestinian Authority President Mahmoud Abbas declared a state of emergency and dissolved the government in Gaza, although Hamas has had de facto control of the territory since then.