BAGHDAD, Iraq (CNN) -- A suicide bomber killed at least 40 people and injured 70 -- many of them women -- during a Shia pilgrimage in northwestern Baghdad Sunday, Iraqi officials told CNN. 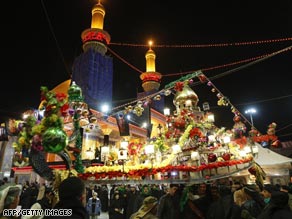 Pilgrims, pictured above, have gathered to celebrate the Shia holy period of Ashura.

The dead included at least 16 Iranians who had come to mark the Shia holy period of Ashura, which commemorates a central event in the history of the movement. At least 32 Iranians were among the wounded. The other casualties were Iraqi, an Interior Ministry official said.

The bomber was a woman wearing an abaya, a robe-like dress, said Maj. Gen. Qassim Atta, military spokesman for Fardh al-Qanoon, an interagency domestic security body. She seems to have been targeting women, Atta and an interior ministry source said. The Interior Ministry official declined to be identified.

The attack appears to be the single deadliest suicide bombing in Iraq since a bomber killed 47 people in Kirkuk in December 11.

It took place in Baghdad's Kadhimiya neighborhood, not far from the Imam Moussa al-Kadhim holy shrine.

Hundreds of thousands of Shiite pilgrims are expected in Baghdad and the southern Iraqi city of Karbala for Ashura, which falls on January 7 this year. Ashura commemorates the martyrdom of Hussein, the grandson of the Prophet Muhammad. He was killed in battle in Karbala in 680, one of the events that helped create the schism between Sunnis and Shiites, the two main Muslim religious movements.