JERUSALEM (CNN) -- Israel will send two envoys to Cairo, Egypt, in the coming days to discuss a Gaza truce plan that is still in its early stages, an Israeli Foreign Ministry official said Wednesday. 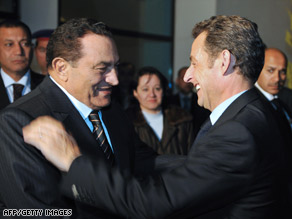 The envoys -- Defense Ministry official Amos Gilad and Shalom Turgeman, a political adviser to Israeli Prime Minister Ehud Olmert -- could head to the Egyptian capital as early as Thursday, the official said.

It is not clear if Hamas, the Palestinian movement that governs Gaza, will send representatives to Cairo. Israel refuses to speak directly to Hamas, which it considers a terrorist organization, but it has negotiated with Hamas through Egypt in the past.

An Israeli government spokesman said the Jewish state welcomes the initiative and will continue its discussions with both countries about how to achieve a cease-fire in Gaza.

"We are continuing our dialogue with the Egyptians and the French to achieve a sustainable quiet on the basis of a complete cessation of hostile fire from Gaza into Israel and an internationally supported arms embargo on Hamas," the spokesman said. "The contacts and dialogue continue. It is clear we need a working mechanism in place to prevent Hamas from re-arming."

Israel opposes any temporary halt to its military campaign in Gaza that would allow Hamas to replenish its arsenal. The Jewish state has agreed to halt its military activities for three hours every other day in Gaza -- starting on Wednesday -- to allow aid to reach Palestinians.

Watch how wounded go to Egypt for treatment »

Sarkozy's office released a statement on Wednesday saying he "is pleased to acknowledge the acceptance by Israel and the Palestinian authorities of the Franco-Egyptian plan."

"The [French] president calls for the implementation of this plan as quickly as possible to stop the suffering of civilians," the statement said.

But a spokesman for French Foreign Minister Bernard Kouchner would only say that France is getting "very positive signals from the region" about the plan.

The Cairo peace initiative is still in a stage of general guidelines, and no specific details have been addressed, the Israeli Foreign Ministry official said.

Those guidelines call for a cease-fire between Israel and Hamas, and an apparatus for stopping arms smuggling into Gaza, the official said.

However, diplomats told CNN that although there is common ground among the United States, the EU, Israel and moderate Arabs on an acceptable settlement, an agreement taking shape among them differs slightly from the French-Egypt plan.

The agreement still taking shape, according to diplomats, would call for a stop to Hamas rocket fire; addressing weapons smuggling into Gaza; and opening the border crossings to improve the economic situation and increase humanitarian aid. A cease-fire would not take effect until those conditions are met, the diplomats said.

"We believe a cease-fire is necessary, but it has to be a cease-fire that will not allow a return to the status quo," U.S. Secretary of State Condoleezza Rice said.

"We are very much applauding the efforts of a number of states, particularly the effort that President Mubarak has undertaken on behalf of Egypt. We're supporting that initiative," Rice said. "I've been in very close discussions with my Arab colleagues, but also with the Israelis about the importance of moving that initiative forward. We're also talking about how the council can best support the effective action that could be taken on the ground."

The United Nations Security Council began closed consultations on the situation Wednesday afternoon, and the Arab Group, comprised of Arab diplomats and diplomats from the Arab League, was scheduled to meet at 6 p.m. ET.

The Arabs are pushing the United Nations to pass a forceful resolution before the end of the day, but it is not clear Western diplomats will support that.

The European Union welcomed the Mubarak-Sarkozy initiative, a Czech representative said at the United Nations Security Council on Wednesday. The Czech Republic currently holds the rotating presidency of the EU. The EU reiterated its call for an immediate cease-fire by both the Palestinians and Israel.