JERUSALEM (CNN) -- The Israeli military says it has found a "sketch" detailing "the deployment of explosives and Hamas forces" in the Al-Attara neighborhood in northern Gaza. 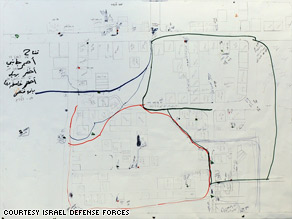 The Israel Defense Forces says this map from Hamas shows positions of booby traps and snipers in Al-Attara.

The Israel Defense Forces issued a news release Friday saying paratroopers found a map that "describes the location of explosive devices and firing positions in the middle of the civilian population in the dense neighborhood, which endanger the life of the civilians."

"That's what Hamas has been doing throughout the entirety of the operation -- perversely using civilians as human shields," said Brig. Gen. Yuval Halmish, officer-in-chief of Israel's Intelligence Corps.

The IDF said the map depicts sniper positions at a mosque entrance and in nearby mosques.

It shows "the directions the snipers are aiming," the IDF said.

The map "indicates that explosives are planted in the entrances of civilian homes."

There are bombs planted throughout the area, including one next to a gas station.

"The important point is the disregard for human life in using entrances to civilian homes," Halmish said.

"They booby-trapped the entrances of civilian houses with explosives put close to them," he said.

"The objective is of course to hit our forces, but a local explosion also damages the houses of the civilians and causes great damage, and likely killing civilians," he said.