JERUSALEM (CNN) -- Israeli forces shelled a house where they had ordered about 100 Palestinian civilians to take shelter, killing about 30 people and wounding many more, witnesses told the U.N. 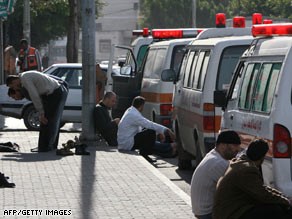 Ambulance drivers wait for Israel and the Red Cross to give them the green light Thursday to leave Gaza City.

Israel Defense Forces said it is looking into the allegations.

"Credible eyewitness accounts" described the incident, which occurred in the volatile Gaza City suburb of Zeitoun, said Allegra Pacheco, deputy head of the U.N. Office for the Coordination of Humanitarian Affairs for the Palestinian territories. Pacheco spoke to CNN on Friday.

Witnesses reported that "about 100 civilians were evacuated" to a house Sunday, and the structure was shelled Monday, she said. The witnesses told the U.N. that two of the survivors said their children died.

"There was no order given to move civilians from one building into another," Israeli security sources said.

However, Pacheco said, "The eyewitness accounts that we have received state that the IDF ordered them to go into this house."

Officials are simply passing along witness reports and not making "accusations of deliberate actions or any legal conclusions on the part of the IDF," Pacheco said.

"There needs to be further fact-finding on what occurred in this house," she said, adding that U.N. officials have yet to speak to the IDF and the Israeli government.

Her remarks came a day after the International Committee of the Red Cross issued a blunt press release saying ambulances obtained access to several houses in Zeitoun "affected by Israel shelling," days after they asked to go into the neighborhood.

The release slammed Israel -- an uncharacteristic move for the agency, which is known for its neutrality and quiet, behind-the-scenes activities.

According to the release, the ICRC had wanted "safe passage for ambulances" to the neighborhood since Saturday, but didn't receive IDF permission until Wednesday.

The ICRC and the Palestine Red Crescent Society "found four small children next to their dead mothers in one of the houses. They were too weak to stand up on their own. One man was also found alive, too weak to stand up. In all, there were 12 corpses lying on mattresses," the ICRC said.

Watch how the conflict is taking a toll on children »

Rescue teams found 15 wounded people and three corpses in other houses, said the ICRC, which casts the shelling as a single incident.

"The ICRC believes that in this instance the Israeli military failed to meet its obligation under international humanitarian law to care for and evacuate the wounded. It considers the delay in allowing rescue services access unacceptable," the ICRC said.

Pacheco said she could not say if the incident witnesses described to the U.N. was the same incident in the ICRC report. But they took place in the same area, she said.

"In the Zeitoun area, it's been a closed area, and there has been fighting and there have been injured. There are other homes and buildings where there were injured who were not evacuated," she said.

Witnesses told the U.N. they had been calling for ambulances to collect dead and wounded people in the Zeitoun buildings, she said.

"This was very much similar to what the ICRC reported yesterday as to what the medical personnel found when they went into the neighborhood," Pacheco said.

The Israeli army built earthen walls that made ambulance access to the neighborhood impossible, the ICRC said.

"The children and the wounded had to be taken to the ambulances on a donkey cart," the ICRC said.

Pierre Wettach, the ICRC's head of delegation for Israel and the occupied Palestinian territories, called the shelling incident "shocking."

See how the Gaza conflict unfolded »

"The Israeli military must have been aware of the situation but did not assist the wounded. Neither did they make it possible for us or the Palestine Red Crescent to assist the wounded," he said in the ICRC news release.

Pacheco on Friday described "a serious protection crisis" in Gaza where civilians are "very vulnerable" to death and injury.

"There is no safe space for civilians. There are no bomb shelters, safe havens, places to flee," she said.