GAZA-ISRAEL BORDER (CNN) -- From a distance, smoke rises over Gaza. It is about as close as most reporters can get to the battle zone. 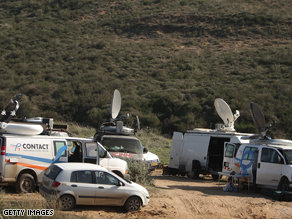 The world's media have been camped on the Israeli border with Gaza.

Israel's media restrictions have prevented dozens of international journalists from entering Gaza, where the Jewish state is waging an operation against militant targets.

International news media are forced to report on the more than two-week-old conflict from a hill near the Gaza-Israel border. CNN relies on a local journalist in Gaza, but cannot send other reporters into the Palestinian territory. In addition, Egypt is also not allowing journalists to cross its border into Gaza.

"It's really frustrating, you can't be there, see there and feel it," said CNN's Nic Robertson. "And you see these pictures from the hospital, but what's happening behind the hospital? What's Hamas doing?"

Israel has accused Hamas militants of exploiting the deaths of civilians to garner international sympathy through the media. Robertson pointed out that allowing reporters into Gaza would give the world a more thorough picture of Israel's military operation.

"The questions we would ask that go beyond the immediacy of the civilian casualties that you want to know about, but the other stuff that really informs you," he said.

It is a very different strategy from Israel's position during its 2006 war against Hezbollah militants in Lebanon. Then, reporters were allowed to broadcast from Israeli artillery positions.

But this time, Israel has changed its tactics and is preventing international reporters from being embedded with the military to avoid interference in military operations, an Israeli government spokesman said.

"There was too much exposure," Daniel Seaman said. "It had an effect on our ability to achieve strategic goals, so that's one of the lessons we learned from the war in Lebanon."

Some Israeli journalists are embedded with the military in Gaza but are not allowed to report from elsewhere.

The Tel Aviv-based Foreign Press Association -- of which CNN is a member -- is among several groups that have criticized the restrictions.

"The unprecedented denial of access to Gaza for the world's media amounts to a severe violation of press freedom and puts the state of Israel in the company of a handful of regimes around the world which regularly keep journalists from doing their jobs," the association said in a January 6 statement.

John Ging, the head of the United Nations Relief and Works Agency for Palestine Refugees in Gaza, said the absence of journalists is preventing the truth from getting out.

Herve Deguine, a spokesman for the Paris, France-based Reporters Without Borders, said the dangers of the current conflict do not override the need for media coverage.

"Of course it's a dangerous place, of course journalists have to take the responsibilities and have to decide whether they want to go in or not and where they want to be," Deguine said.

"But banning the press to enter Gaza is just unacceptable."

Almost two weeks into the operation, Israel did allow a western camera crew across the border. But footage shot by the BBC crew was subject to clearance by Israeli military censors.

Images from inside Gaza did filter out to the world from journalists based inside Gaza who work for news agencies such as Ramattan and broadcasters like Al-Jazeera.

Inside Gaza, Hamas has controlled the images broadcast by the media, and pictures of suffering have been encouraged. But the outside world has seen very few images of Hamas fighters or their rockets being fired into Israel.

Both the Israeli military and Hamas have launched pages on the Web site, YouTube. Israel Defense Forces says the shared video is "documentation of the IDF's humane action and operational success in Operation Cast Lead."

In times of war, the line between winning and losing can come down to the public relations battle as much as the military offensive itself.

But for journalists, it's about finding a balance in the story -- a difficult task when they are unable to cover all the angles.