(CNN) -- Israel's security cabinet could vote Saturday on the basics of a plan that may end the fighting in Gaza, as movement toward a cease-fire seemed to pick up steam on multiple fronts. 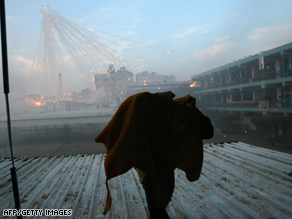 A man escapes following an Israeli strike in Beit Lahia in the northern part of the Gaza Strip on Saturday.

The meeting in Jerusalem, reported by local media Friday, would come a day after Israeli and U.S. diplomats signed an agreement designed to stop arms smuggling into the Palestinian territory.

In Washington, U.S. Secretary of State Condoleezza Rice and Israeli Foreign Minister Tzipi Livni signed a memorandum of understanding that would prompt an international effort to stem the flow of weapons and explosives into Gaza.

Friday's agreement outlines a plan to share information and provide technical assistance to keep weapons out of the hands of Hamas, which Israel and the United States consider a terrorist organization.

Ending the smuggling, which is one of Israel's key justifications for a three-week offensive that has claimed more than 1,000 lives, would be another potential step toward peace.

Watch a report on aid shortages to Gaza »

Rice said the steps -- which include blocking arms from Iran into Gaza, working together to identify ships carrying weapons and sharing technology to stop the building of tunnels from Egypt to Gaza -- would be significant in keeping militants unarmed.

"The United States is reaching out to its partners as well. Together, the steps that we and other members of the international community can take will contribute to a durable cease-fire," she said.

"There must be an international consensus that Gaza never be used as a launching pad against Israeli cities."

Livni said that ending the fighting in Gaza wouldn't be "achieved by agreements with terror, but with effective arrangements against it" -- a unified effort by the international community. She said a "durable" end to hostilities requires a stop to weapons smuggling into Gaza.

Hamas says a cease-fire alone is not enough.

"We are working in every direction so we can achieve our objectives in stopping the aggression, lifting the blockade, opening the crossings, and the compensation of our people and the rebuilding of the Gaza strip," Hamas delegation spokesman Salah Bardwill said.

Israeli Defense Ministry official Amos Gilad remained in Cairo on Friday, discussing a cease-fire proposal. A Hamas delegation is also in the Egyptian capital, talking with leaders there who are trying to hammer out a temporary truce.

Watch opinions from the iReport community »

Other diplomatic efforts include U.N. Secretary-General Ban Ki-moon's ongoing trip through the region. Ban has called for an immediate cease-fire and said he is pleased with Egypt for serving as host of the talks and acting as an intermediary between Hamas and Israel.

The state of Qatar also held an emergency summit on Friday to find a unified Arab voice on Gaza. The meeting brought together some Arab and Muslim leaders, including the presidents of Iran and Syria and the leader of Hamas, Khaled Meshaal.

Friday evening, the United Nations' general assembly voted 142-4 to call on Israel to abide by a January 8 resolution by the U.N. Security Council.

The resolution, which called for an immediate cease-fire by both sides in the conflict, was universally ignored.

Israel and the United States were among the countries voting against Friday's effort.

Meanwhile, fighting raged on in north and south Gaza on Friday for the 21st day in Israel's military operation.

Watch Palestinians' struggle to survive in a war zone »

Israel's military reported firing on more than 25 Hamas targets, including Hamas fighters with rocket launchers, bunkers containing weapons and a tent with Hamas operatives inside.

A CNN crew late Thursday was able to make its way into Gaza from Egypt -- an effort that has been difficult for foreign journalists, with Israel tightly controlling access through its border.

On Friday, the crew got a firsthand look at the toll three weeks of airstrikes and ground attacks have had.

"You are doing a lot of work as a medical staff and, at the end of time, you lose the patient," said Egyptian doctor Mohamed Shama, who was working Friday at the Ysif Najjar Hospital in Rafah, near the Gaza-Egypt border.

Shama said he was working on a patient named Ala'a, who had taken shrapnel to the eye, chest, lungs and intestines. It was not clear whether the patient was a civilian or a Hamas militant.

Shama said he had seen 12 patients die Thursday and Friday, and as he prepared to operate on Ala'a, he said the man's chances of survival were slim.

"You cannot leave the patient on the ground bleeding until death; you have two choices -- doing seven hours of work and lose the patient, or let him die."