PARIS, France (CNN) -- French cargo planes carrying aid workers and supplies are bound for Egypt in an effort to deliver humanitarian aid to war-stricken Gaza, according to a French Foreign Ministry statement on Saturday. 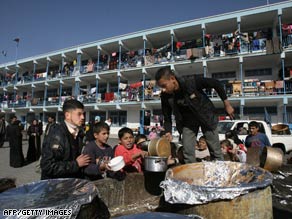 Palestinians who fled their homes during Israel's offensive receive food in a refugee camp in Gaza on January 15.

An Airbus A-310 and three military cargo planes will arrive in Al-Arich, Egypt, on Sunday, with seven tons of medical supplies and equipment to aid an estimated 500 injured Gazans, the ministry said.

A team of 80, including three emergency medical teams and one de-mining crew, with expertise to deactivate unexploded ordinance, are part of €3 million ($3.9 million) in financial aid delivered to Gaza since the start of the conflict, according to the statement.

It is unclear whether the aid workers and supplies will be allowed to enter Gaza from Egypt.