Analysis: After the war, an uneasy peace

GAZA CITY (CNN) -- Just a few hours before President Barack Obama rode in a triumphal parade from Capitol Hill to the White House, in Gaza City there was another triumphal parade. 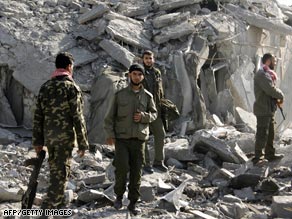 Thousands of people, carrying Hamas' green flag and the banners of other Palestinian factions, converged on the now demolished Palestinian parliament.

There, the usual bombastic speeches were made over a makeshift sound system about "victory over the Zionist enemy" and the need to resist Israeli aggresion and liberate all Palestinian territory from Israeli occupation.

I've covered dozens of such "victory" celebrations in Gaza -- and what struck me as I watched the smiling, chanting crowd go by was that despite everything that has happened here since 27 December 2008, when Israel launched its version of "shock and awe," little has actually changed.

Despite Israel's intense bombardment of Gaza, the deaths of more than 1,300 people (a majority of whom appear to have been civilians), the wounding and maiming of more than 5,000 more, the destruction of thousands of buildings, including ministries, hospitals, U.N. facilities, even Gaza's American International School, Hamas is still in business.

The morning after Israel's unilateral ceasefire went into effect, Hamas-controlled police were back on the streets directing traffic. Hamas fighters were walking around central Gaza City with their AK-47 assault rifles slung casually over their shoulders, workers from the electricity company had begun the mammoth task of repairing the damage, and government bulldozers were busy clearing rubble off the streets.

That same morning I was on the northern edge of Beit Lahiya, close to the border with Israel, and saw two rockets streak into the sky in the direction of Israel. The rockets were a message to Israel: We are still here. Later Sunday Hamas announced its own ceasefire.

Israeli officials insist they have successfully crippled Hamas, but no one in Gaza -- not even those who would like to see Hamas disappear off the face of the earth -- shares that opinion.

Hamas was shaken by the Israeli offensive, but is still standing. Among many in the Arab world -- though not necessarily the region's rulers- -- Hamas and its fighters are now heroes.

Like Hezbollah in Lebanon in 2006, Hamas did not raise a white flag nor did its fighters surrender en masse to Israeli forces.

Compare that with the utter humiliation and defeat suffered by the combined regular armies of Jordan, Syria and Egypt in just six days of fighting with Israel in June 1967.

A pattern may be emerging where the Israeli military -- by far the best equipped in the region -- simply cannot defeat its enemies on the battlefield. And, as any student of the Middle East knows, to survive is to triumph.

Also unchanged is Israel's determination to maintain its stranglehold on Gaza, put in place in January 2006 following Palestinian parliamentary elections that brought Hamas to power.

It will almost certainly not ease its strict control on what and how much goods enter and exit through Gaza's crossings. Israel is equally determined not to open a dialogue with Hamas, and will do its best to bend sympathic ears in Washington and European capitals to ensure no one else talks to them either.

Western warships may soon be deployed to ensure nothing -- weapons but also non-military goods -- reaches Gaza by sea. Officials of the European Union have said no aid will go to Gaza as long as Hamas is in control.

Likewise, Israel and the U.S., during the final days of the Bush administration, signed a memorandum of understanding aimed at stopping smuggling from Egypt to Gaza (never mind that Egypt was neither a signatory nor was consulted).

It all adds up to a continuation of the policy best summed up by Dov Weisglass, an advisor to Israeli Prime Minister Ehud Olmert, who said: "The idea is to put the Palestinians on a diet, but not to make them die of hunger."

In short, all the factors that led up to Israel's offensive -- the rockets, the siege, Hamas' political isolation -- are unchanged. After the war, Hamas needs a respite, the Israeli government probably would like some relief from the harsh international criticism of its actions, and the people of Gaza are desperate for peace and quiet, as are the Israelis who live around Gaza.

There may indeed be a period of relative quiet, but another flare up -- perhaps worse than the latest -- is a definite possibility.

Get ready for the next round.