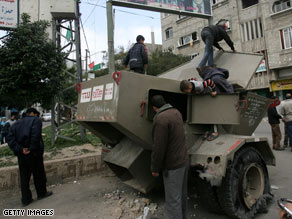 Palestinians look at an damaged rocket launcher left behind by Israeli forces.

"The forces are now redeployed outside the Gaza Strip, and are prepared for any development," a military statement read.

During their withdrawal, Israeli troops warned Gaza residents to avoid unexploded bombs or shells left behind and report their location to Israeli authorities.

Israel said it had achieved its goal to halt Hamas' firing of rockets into southern Israel from Gaza. Hamas, the Palestinian militant group that has controlled the territory since 2007, also declared victory in the conflict during a rally in Gaza City on Tuesday.

U.N. Secretary-General Ban Ki-moon, who visited the territory Tuesday, criticized both sides and the international community for what he called their "collective political failure" in settling the decades-old Israeli-Palestinian conflict.

The conflict, which began December 27, has left more than 1,300 Palestinians and 13 Israelis dead.

Confirmation of the Israeli withdrawal came within a day of the inauguration of Barack Obama as the new president of the United States, replacing George W. Bush, whose administration was among the most supportive of Israel in decades. Ban said he hoped Obama would consider settling the conflict "a matter of priority."

Speaking during a visit to Sderot, the southern Israeli city that has endured rocket fire from Hamas for years, Ban said the Bush administration was "leading and heavily engaged" in the region, but added, "Unfortunately, we have not achieved the goals."

Obama has vowed to move swiftly and has said he was assembling a strong team to be "immediately engaged" on "day one." In a statement welcoming the new U.S. president, Olmert said Israel and the United States would remain "full partners in advancing peace and stability in the Middle East."