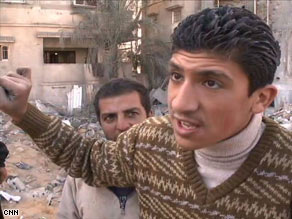 In return, some are accusing Hamas of carrying out "punishment shootings" against suspects.

"In this war, we arrested many spies and collaborators, and we will stay continuing to catch these spies and put them in jail and in court," Ehad al-Ghossain, Hamas' Interior Ministry spokesman, told CNN.

"Some factions wanted to help Israel, to kill Hamas and Hamas leaders, and were giving information to the Israelis."

Watch Ghossain talk about the enemy within »

Fatah's power base is in the West Bank. It is locked in a power struggle with Hamas, which won parliamentary elections in January 2006 and wrested Gaza from Fatah in violent clashes last year. Mahmoud Abbas, Palestinian Authority president and leader of the Fatah party, is a United States ally but holds little sway in Gaza.

Fatah denies spying on Hamas for Israel, and party leaders said Thursday that at least 175 of their members had been rounded up and tortured in recent days.

The highest-ranking known casualty in the Israeli offensive may have been Hamas Interior Minister Said Siam, who was killed by an Israeli airstrike January 15.

Siam's neighbors said Fatah supporters may have pinpointed his location for Israel.

"My brother and sister saw three or four spies, including a woman," neighbor Omar Hassan said. "The spies left, and then Said Siam's apartment was hit."

Meanwhile, at Gaza's Shifa Hospital, medical officials said injuries they have seen would be consistent with suspected spies being shot in the kneecaps, elbows, hands or feet as punishment.

He said he has treated at least six patients, including a woman, for gunshot wounds since the cease-fire with Israel was announced.

Another medical source said the shots were fired from close range, and the victims have claimed that the injuries stemmed from punishment or a factional vendetta.

Punishment shootings are a time-tested tactic used worldwide by guerrilla and militia groups, from Che Guevara in Cuba to the Irish Republican Army in Northern Ireland. They are meant not only to take revenge but to send a message to others.

Two self-described Fatah loyalists were found heavily bandaged at a Gaza City safe house. One of their colleagues refused to say where or why they were injured but denied that they were spying.

The other man, he said, was struck on his legs with a metal construction bar.

"Four people were beating him," he said.

A Hamas security source said the shootings occurred because renegade gunmen took the law into their own hands. And al-Ghossain said there was no official order within Hamas to carry out such shootings.

All About Hamas • Fatah Organization • Israel